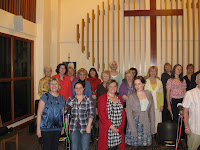 It was a delight for CMM to travel back to Staines in February.  Two years ago we had visited the Methodist Church in Staines for a Rock weekend, performing the musical, but also including some Holy Spirit workshops.  This time they invited us to bring our own soloists, and they had fewer rehearsals in advance. 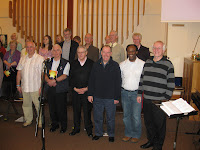 Despite the fewer rehearsals, Roz Sendorek had done a wonderful job with the choir, and they sounded absolutely brilliant.  We had a wonderful time rehearsing with the group.  Helen and Roger took sectionals - Helen spent a lot of time with the men working on the two 'baddie' songs.  One of the baddies was John Izzard, the minister of the church, and that led to a lot of laughs!

On the Sunday morning CMM led the morning service alongside John.  It was a lovely morning, and God really blessed us.  Helen led some worship and Roger spoke about the 'More than' God.  It was great to have Phil jamming away on the organ in the worship!  At the service we were amazed to be joined by a young man who had flown in to Heathrow from Zambia that morning.  He had looked online for the nearest church, and walked all the way from the airport to Staines.  After the service he walked back again, and got on his flight home to Helsinki. 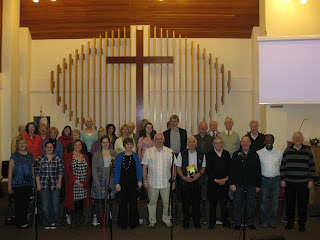 The performance went really well in the evening, and there was a really large audience, which was great.

A fantastic weekend - thanks to all at Staines for inviting us!
Posted by Helen at 12:07