We recently received an amazing email: 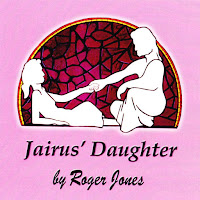 Dear Roger,
I am hoping that you will remember me from the early 1990s. I was Jairus' Daughter in the Girls' Brigade production and tour, and made the recording with you in 1992. I was 12 when we were touring and I turn 40 next year...! I have been meaning to get in touch for a while having found CMM on social media a year or so ago. I'm so pleased that CMM's work goes from strength to strength, and that you are continuing to share the good news of Jesus Christ.
I now live in London with my husband and our three beautiful children. I studied Theology at Cambridge, and have spent my professional life working in the charity sector in fundraising and volunteer management.
I particularly wanted to get in touch to let you know that I have just been approved to train for ordination. It comes after four years in the discernment process with Southwark Diocese and I will be starting training next September. As part of the process, I have, of course, spent considerable time reflecting on the experiences God has given me over my life. It has been wonderful to think back to my time working with you and the team on Jairus' Daughter: being introduced to extempore prayer, worship songs and the transformative power of the Holy Spirit aged 12, which was quite a change from the Church we attended each week as a family. The experiences I had as part of Jairus' Daughter affected me deeply and, I believe, helped to lay the foundations for my future ministry.
I loved Theology as an academic subject and studied it avidly at school and university, but the study made me really question my faith and I didn't get confirmed as a teenager as I wasn't sure I really believed. I returned to Church properly in my 30s - wanting to give my children the same experience I had had - and started attending my local CofE Church in 2012. I gradually became more involved in Church life (leading children's groups, PCC Secretary etc.) and then started preaching regularly after I began to feel called to something more.
I wrote to you, when I was 12, saying that Jairus' Daughter had helped me to realise that I would like to be a vicar when I was older (the letter was in fact written before the first women priests were ordained in the Church of England!). My Mum found a copy of this long-forgotten letter and ambition at exactly the time that I started to feel called to further ministry four years ago - God's perfect timing!

So thank you for everything you did to nurture my faith and lay the foundations of all that was to come for me - and all that is still to come. I am so grateful to you and the Jairus' Daughter cast for the rich and deep faith that you all shared so completely with a young girl. I was very sad to learn of Mike Stanley's death - a truly wonderful man who lived out his faith in all he did.
Sending my thanks, love and very best wishes to you,
Jen x
Posted by Helen at 11:26