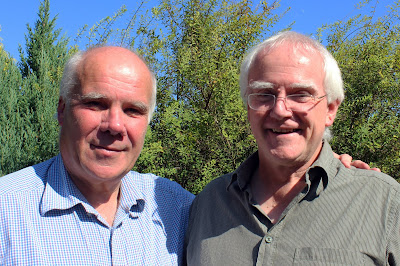 We are heartbroken to announce that Geoff Rudge, chair of the Christian Music Ministries Trust, died yesterday morning, 2nd October 2019. Geoff had been ill for approximately a year. All our love and prayers are with Mary, his wife, and the whole family.

Geoff has been so important to us in more ways than we can express here. Roger met Geoff on his first day at Saltley Grammar School, and they grew together both in life and as followers of Jesus. In Chapter 11 of Roger’s biography, ‘Musical Man’, Graham Allan reflects on some of the people who have been important to Roger’s ministry. Geoff is the first person to be mentioned.

It was Geoff who encouraged Roger to attend Christian Endeavour with him at Grenfell Baptist Church in 1964. At this group, Roger first saw what living for Jesus really looks like, and it was instrumental in his giving his life to Jesus in 1966. Roger says, “The morning after I became a Christian, I sat with Geoff in a classroom at Saltley Grammar School. I said to him, ‘Geoff, I became a Christian last night.’ And he replied, ‘Right. We’ll have a prayer meeting then.’”

Even though Geoff wasn’t a great singer, he was a worshipper, and he truly appreciated the power of music to touch many. For many years he was Roger’s right-hand-man when it came to organising choral house parties to Israel, and he was one of the EBRG house group who first encouraged Roger to leave teaching and go full-time in ministry.

In the book ‘Musical Man’, Roger made a few comments about Geoff. This is what he said:

Geoff was incredibly practical and straightforward. He did not mince his words or water things down; he knew the power of the Gospel and shared it with grace and strength. He was never afraid to confront issues or face challenges – he chaired the CMM Trust with much wisdom and love.

We will miss him greatly.

In the time of our dying we’ll see the saviour’s face
Beyond struggling and crying we know his power and grace
In the loving without ending know the truth we are defending
And we’ll see Christ face to face: knowing Him!

(from Wildfire by Roger Jones, lyrics by Alison Fuggle)