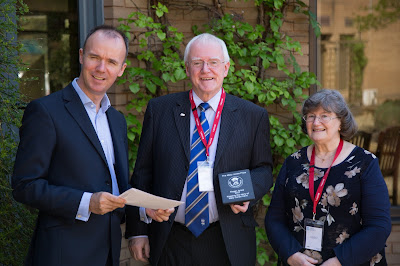 CMM are delighted to announce that Roger travelled to the Bible Society HQ in Swindon last week to collect the 2017 Mary Jones Prize (although he very wisely maintains that he already had it).

The prize is given to the person who has worked with distinction to keep alive the story of Mary Jones - the Welsh girl who saved for six years, and then, in 1800, walked 26 miles across the Welsh mountains to purchase a Bible from the Rev'd Thomas Charles. Inspired by Mary's determination, Charles was then instrumental in helping to establish the Bible Society four years later.

In composing Greater than Gold in 1983, Roger captured this story in music, bringing it to the attention of many people who may not otherwise have heard it, and it is for this reason that he has received the prize.
Posted by Unknown at 11:15