Rock and an orchestra - a view from the orchestra

So, the date has been and gone, the winner of the FA Cup has been decided and the Royal newlyweds are hopefully enjoying their first few days of marital bliss. For those involved in the life of CMM however, May 19th marked a much more important occasion – a special performance of Rock with an orchestra at the Coton Centre in Tamworth to celebrate Roger's 70th birthday.

At the start of the day I helped with registration - ticking people off the list when they arrived, distributing name labels or selling vocal scores to those who needed them. After welcomes and introductions in the main auditorium, those like myself who were part of the orchestra moved into the hall to begin rehearsals. Under the baton of Annie, whose orchestrations most of us were about to sight-read, we set to work learning our parts. Annie's oboe part for Rock contains some particularly beautiful passages, and it was a great pleasure for me to have the opportunity to play them, after years of listening to the CD thinking 'ooh that bit sounds nice!' As a whole, the sound produced by the orchestra was fantastic, as there were representatives from virtually every section, and it was great to be part of a large band, making a change from the small combos that are formed by the team for each gig.

The sound produced by the choir was equally as impressive, as we discovered when we came together for a joint rehearsal after lunch outside in the glorious sunshine. The vocal soloists who took part were also on top form, and I believe the dancers were too, although it was quite hard to watch them, the conductor, and my music at the same time!

The performance itself was a joy to be part of – the orchestra, choir, soloists and dancers all came together to powerfully share the story of Peter's journey with Jesus. For those of you who've read my previous blog posts, you'll know that Rock is my favourite of Roger's musicals and so the opportunity to be part of a performance on the occasion of Roger's 70th birthday was a real privilege, and I'm sure it brought back a lot of happy memories for those who were involved in the original productions and subsequent tours. 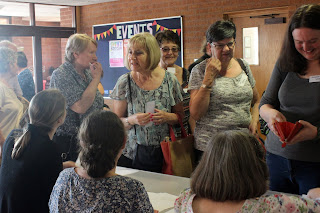 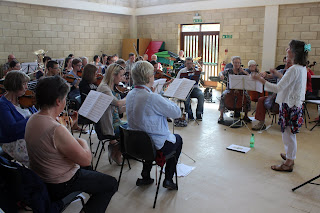 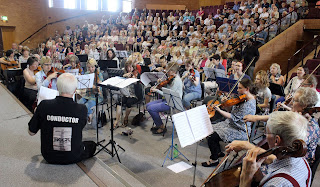 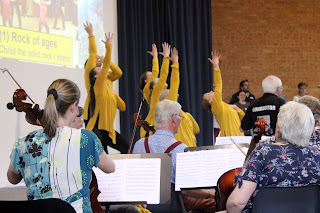