After an action-packed June, July wasn't much gentler, although most of us did manage to fit in a holiday somewhere - Annie was able to cat-sit for her brother in London for a few days, Helen and James went to Scotland, and Roger and Mary went on a cruise to the Fjords.

Performances of Snakes and Ladders continued throughout the month for Annie and the CMM Choir.  Audiences were good, and the choir and soloists did a fantastic job.  A huge well done to all who were involved.

Right at the start of July Roger travelled to Macclesfield to lead a Barnabas day.  It is always such a joy to visit Wendy, Dot and the choir there.  They did a fantastic job learning the music, and the production was fabulous.

It was an interesting day for the team, since a number of the soloists had not sung the musical before - regulars Devon (Saul) and Alan (John Mark) were joined by Simon Cooper as Barnabas, Katie Leaver as Miriam and Sarah Harley as Rhoda.  Particular thanks goes to Simon who came to sing just a day after moving house (you can hear about his house move here).  The team were also brilliantly supported by Marilyn who played flute and helped Roger with conducting, and Sue Walker who was a lovely calm presence on the bookstall and as prayer support.

Just up the road in Manchester there was a rival performance for this one - the United Christian Singers were putting on a concert of a variety of pieces of music, including many of Roger's.  This was a special last concert for their conductor Walter Brisk.  Roger was invited but of course unable to be there - so he sent a video message for Walter instead.  Hopefully it worked ok! 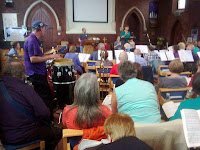 On the same day, Annie travelled to Chesham in Buckinghamshire for Angel Voices in a day.  Annie wouldn't normally undertake such a huge musical in a day, but she had been reassured the singers would have had a taster beforehand!

This was a very special day in that the organiser, Sue, had managed to make sure that not only was there a large choir, there was also a very big orchestra - they filled the main area of the church and all audience had to go in the balcony or around the sides! 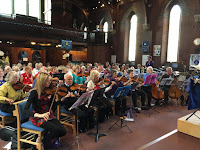 Annie took with her a large team to help, including soloists Sarah, Amy, Catherine, Richard and Jonathan, as well as instrumentalists Debbie, Lewis, Cliff and supporters Jenny, Susan and Julie.  The day was massively hard work for Annie, but also incredibly rewarding.

Huge thanks go to Sue and all in Chesham for their hard work.

In the week following Macclesfield and Chesham, the music book and CD for Songs of Christmas finally arrived in the CMM Office.  Tim had his work cut out sending out all of the pre-orders. 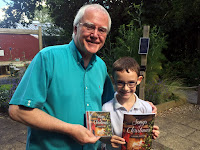 Roger managed to visit some of the children who sang on the CD, and even presented a few of them with their CDs in their school assembly!

Our main event in July was at the DeMontfort Hall in Leicester, and was Follow 2016 - a special day organised by the Lay Readers Association to celebrate 150 years.  It was a real honour to be involved alongside other notable speakers and worship leaders such as Pete James and Paula Gooder.

The day began incredibly early for Roger, Annie, Helen, Devon and Tim, who travelled to the hall ready to set up the exhibition stand and to be on stage for a sound check at 7.30am!  Sadly the technicians weren't so early and our sound check ended up at 8.30am...

Then after a breakfast sandwich from one of the stalls, the CMM team and the rest of the public arrived ready for the opening worship at 10am.

CMM led a Worship Works session in the marquee (it's very tricky to fit a whole day of teaching into 45 minutes...) and then led a quick rehearsal for Barnabas teaching the choruses from the songs (also in 45 minutes!).

Then in the afternoon we took this scratch choir on to stage, plus all of the soloists from the CD and instrumentalists Helen, Annie and Kevin.  It was so helpful having choir stewards Eddie and Jenny in support.  It was great performing on such a magnificent stage again, and the performance went remarkably well.

Meanwhile Tim and Nicky did a great job on the exhibition stand, chatting to people and selling plenty of products.  Thanks to everyone for your help on the day.

Just two days after the tiring day in Leicester, Roger, Helen and Devon travelled up to Hull along with Sarah, Chris and Richard (Barrie was already there!).  It has always been so helpful that the choirs in Hull have been willing to go for a midweek performance - it has meant that we could slot them into our schedule more easily.

This time the team headed straight to St Mary's Church in Beverley for a rehearsal with the choir on the Monday night.  The venue really is quite magnificent, but huge old churches like this can pose a slight problem for sound technicians!  Stuart did a brilliant job somehow squeezing the equipment in, and it was great to see him again having worked with him in the past.

Sarah was reprising her role as Rhoda from the Macclesfield performance, and this time was joined by Helen as Miriam.  Devon and Richard stuck to their regular roles as Saul and John Mark, but this time Barrie who has often played John Mark in the past had to switch to the part of Barnabas.  He did a great job.  Chris supported on his wonderful multitude of clarinets and saxophones!

The Tuesday was a day of rest for Roger, and Richard headed home for a day in the office, but the rest of the team travelled over to Bridlington and Flamborough head for a beautiful day out in incredibly hot weather.  Thanks so much to Barrie for organising that one.  Possibly the best fish and chips ever (when the seagulls weren't stealing it), and loads of seals were basking and playing off the coastline. 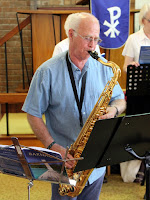 That evening was the performance in Beverley, which went very well and had a really good audience.  Local choir member Carol had done an excellent job advertising and organising, and there was a brilliant atmosphere afterwards over refreshments.

The following day the team had another relaxing day out, this time including Richard, at Hornsea Mere, where there just happened to be a putting green.  Then after dinner wonderfully prepared by Liz there was a rehearsal and production at Willerby Methodist.  Once again there was a fabulous audience, and the choir really were excellent - despite the incredible heat.

Thanks so much to Barrie, Phil, Liz, Carol, Vicky, Jean and all in the greater Hull area for their amazing hard work and support.
Posted by Helen at 14:02