Beginning with the music week at Abbot Hall, June was a particularly busy month here at CMM, with plenty of Barnabas productions as well as other musical-in-a-day events.  And at the same time we were working hard behind the scenes trying to get the Songs of Christmas recording and music book ready for release.  God has been very good to us!

First though, the exciting June news - while Roger and Mary were on holiday in Scotland, Sally gave birth to Petra Jade (over a week early).  Both mother and baby are doing well, and we are so thankful for her safe arrival.  Please pray for Sally, Karl, Molly and Petra. 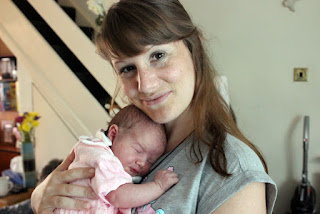 The first Barnabas production in June was at St Mark's Church in Haydock.  In a strange way it was the return fixture for the Barrow-in-Furness production back in April, as the choirs in the different venues have a brilliant relationship and decided to join together and support each other.  We had a brilliant welcome at St Mark's, who looked after us amazingly well with their own coffee shop in the foyer.  Locals Paula and Ben Bolton-Maggs were brilliant as always - Paula with the local choir training and Ben looking after the technical side of things.

The CMM team included Carol and Sharon, both involved in training the combined choirs taking the Rhoda and Miriam parts, and then Barrie, Bill and Devon as John Mark, Barnabas and Saul.  It was also a delight to be joined by Gemma on clarinet, Helen on flute/trumpet and Jane as prayer support and dance.

The performance was really well attended and went down incredibly well.  It was brilliant to take some of the pictures and words God had given our prayer support team and share them with the choir and audience.  The Lord was really working in people's hearts.

The following morning the team led worship in Hindley for the churches together in Hindley Green area.  It was great fun to see so many from the choir and also worshippers from a variety of backgrounds and styles.  Thanks so much to all who organised the weekend.

June saw the start of a run of productions of Snakes and Ladders by the CMM Choir.  The choir performed 6 times over June and July across the West Midlands in Kenilworth, Bournville, Redditch, Edgbaston, Erdington and Marston Green.  The soloists had worked so hard on their parts and the choir sounded fabulous.

The CMM choir is open to new members - they rehearse on Monday evenings in Harborne (with Sylvia Whalley) and on Tuesday evenings in Ward End (with Annie Routley).  Their next performances will be The Inn Crowd in December.

In Mid-June it was brilliant to travel the short distance to north-west Notts to visit the home churches of our associates Carolynn and Yvette (Newthorpe Baptist Church) and also Richard Harvey (Nuthall Methodist Church).  Carolynn has regularly trained choirs to perform Roger's musicals, and this time we were able to perform twice together - once at each church within the space of a couple of days.

All of the soloists were local on this occasion (although admittedly three were CMM associates!)  Carolynn and Yvette took the Miriam and Rhoda parts, Richard had a break from his usual John-Mark role to sing the part of Saul, and they were joined by Andrew as John-Mark and Dave as Barnabas.  The soloists were also joined by a quartet of musicians - Chris on sax and clarinet, Kevin on cornet, Yvonne on flute and Helen playing the odd note on trombone.  Having the instrumentalists really added to the sense of drama!

The performance at Newthorpe was sold out, as it is quite a small venue, but they still found room to squeeze in Devon and Mick on the back row!  We always love visiting Newthorpe as 25 years ago our Jairus soloist, Keith Riley came from that church.  Sadly Keith died before the premiere of the musical, so the relationship with Newthorpe has always been so special.

At Nuthall there was a little more room for audience, choir and
soloists, and it was so lovely to be looked after by the Harvey family (fish and chips - mmm!).  Richard hosted the evening brilliantly, and there was a great crowd in the building.

Following on from Roger's hectic few days with the choir at Newthorpe and Nuthall, he and Mary travelled down to Norwich for a well-earned rest (if staying with Ruth and David Southgate can ever be seen as rest!).  It wasn't all holiday though, as on the Tuesday they travelled to Mundesley to lead a special 'Musical Man' afternoon for the Mother's Union, organised by great friends Harry and Barbara Hicks.  They even had a coach-load of visitors from another MU organisation nearby come along too!

The run of Barnabas productions in June continued with a visit to Welshpool Methodist Church, for a performance brilliantly organised by Janice Rhodes.  Over a number of years Annie has regularly visited the Welsh borders area for various musical-in-a-day events, and these have blossomed into not only a Barnabas production but also a Worship Works day last year.  It is so great to work with the folks in the area - they are such a blessing to us.

This time Roger was without the support of Helen or Annie, but he did have a fabulous CMM team - Barnabas and Saul were played by Bill and Paul; Dave and Caroline Finney took the roles of John Mark and Miriam, and Ann played Rhoda.  It was also lovely to have Felicity and Rachel come along to play clarinet and oboe/flute respectively - they are both quite new to CMM teams, and it is so good to encourage young instrumentalists in this way.

It was also a privilege to the lead the service the following morning - Bill led the service, Paul led the prayers and Roger spoke.  It is always so good to be able to share with a congregation after a musical performance - those who weren't able to come still can have a taster and hear the message. 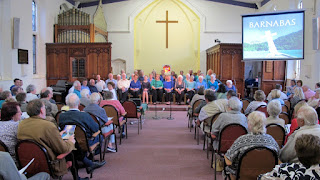 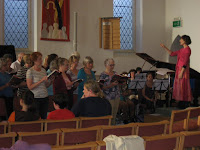 While Roger was in Welshpool, Annie travelled to Witney in Oxfordshire to conduct their performances of Wildfire.  The choir has already been beautifully trained by Guy, but he was needed to take a solo role, so the Witney Inter-Church Singers invited Annie along to help.

The production really was quite special - drama, dance, soloists, choir and orchestra!  Annie really had her hands full to bring in all the different groups at the right moment.

Annie also was able to share some thoughts at the end of each performance, talking about how there is no such thing as a 'practical' person as opposed to a 'spiritual' person.  Stephen was both these things.  Well done to all who participated in or organised the event.  What an amazing witness!
Posted by Helen at 13:06