We've had a manic May here at CMM - loads of different events and a few things behind the scenes.  For this CMM in action blog post you can read about all of the events we have led and the places we have visited.  Details of our exciting project behind the scenes will come on a future blog post.

Way back in early May Roger and Mary took an evening out to go and visit the choir in Macclesfield as they prepare for their Barnabas performance in July.  In the past when there used to be a nationwide tour for each musical, Roger would sometimes visit each choir twice in advance - firstly for a 'taster' to introduce Church leaders and potential singers to the musical.  Then as the performance approached there would be a Pre-Visit, which took the form of a fun rehearsal with Roger and some of the soloists - Roger always says that he would have written the musicals for the Pre-Visits alone!

This particular visit was half-way between a taster and a Pre-Visit, with loads of time after the visit for the choir to really get stuck into working on the musical.  It was also great fun - Roger and Mary were brilliantly looked after by Wendy in Macclesfield, and the choir were coming on excellently.  Poppy was also a special guest for the evening, sitting quietly at the back.

The other significance of the evening was the location - All Saints, Brough Street West.  Roger has been to this church on so many occasions, but it was only on this visit that he realised it was here that he held his first ever CMM weekend after going full time in ministry, 30 years ago.

We look forward to the performance - 2nd July, 7.30pm at Park Green United Reformed Church.  Tickets are £5 and available from Macclesfield CMM Choir members or from 'The Hope Centre, Park Gree.'  Further details available from macc.cmm@ntlworld.com or 07702 376937.

The first full performance of Barnabas in May was at Trinity Methodist Church in Kidderminster.  Roger and Annie were accompanied by a CMM team comprising of Christine, Ann, Amy, Richard H, Richard A, Devon and Christine.  It was Richard A's first time as part of the Barnabas cast, and we were delighted to have him on the team.

The whole day was incredibly special for the New Life Together Choir in Kidderminster, as it was their 30th Anniversary as a choir. We have been privileged to have the wonderful support of this choir over the years, and they have taken part in so many of the musical tours.

We had this lovely message from the choir:

Just wanted to say a very big 'thank you' for coming and leading us at Trinity at Kidderminster!
We all thoroughly enjoyed ourselves presenting Barnabas and it was really great to be working with you and the CMM team again.
The audience also seemed to thoroughly enjoy the musical and we have had a lot of very positive comments about the presentation - many wanting to know when we are doing it again!

Annie had a very busy weekend, as the very next day she travelled to Whitwick in Leicestershire for a special CMM Choir performance of Angel Voices.  The choir first learned Angel Voices for a run of performances last year, and since then they have had a number of invitations to take it further afield.  This invitation came from a lady who had seen their performance at the Roman Catholic Charismatic Conference last summer.

Everyone who took part or watched felt that this performance at Whitwick was particularly powerful.  Annie received this email in response:

Dear Annie
Just want to say a huge thank you to you and the choir for the wonderful experience of Sunday.We felt so privileged to have experienced the Lord Praised so wonderfully in our Beautiful Church. It was an hour and a half of pure joy. From the bottom of my heart I thank you all.
May God Bless you all and continue to shed His glorious light on you all and those you love.
Love In Christ Jesus. Anne

Over the years Roger has built up a lovely connection with Aldwick Baptist Church in Bognor Regis.  He has a number of friends in the church, and has regularly visited, taking part in Sunday services and leading workshops for the music group.

This year Roger was invited to preach at their anniversary weekend (which also happened to be Pentecost) and to lead a music group workshop on the afternoon beforehand.  He was joined not only by Mary, but also by Sarah and Val, who were a great help both musically and spiritually.  The weekend was great fun, and Roger felt at liberty to take a bit of a risk in his preaching - using the Pentecost theme to talk about speaking in tongues.

It was also Roger's birthday, so he was duly presented with a lovely cake, which we are still finishing off here in the office! 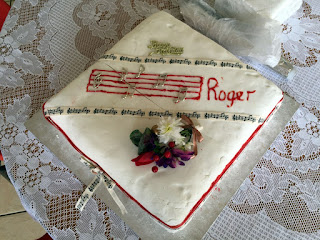 May also held the wonderful annual event which is the CMM Trust Dinner (formerly the EBRG Trust Dinner).  It was wonderful to gather together a number of our supporters who are fairly local to the West Midlands and to share in a meal together.

Roger gave his 'State of the Union' address, and Geoff shared some exciting news about the change of the name of the trust from EBRG Trust to CMM Trust.

The following weekend the CMM team was split in two - Roger and Helen travelled down to Brixham near Torquay, and Annie travelled north to Eccleshall.

The event at Fore Street Methodist Church, Brixham, had been in the diary since 2010!  The church were celebrating their 200th anniversary with a year of events, and a musical performance with CMM was something that had been long anticipated and looked forward to.

The CMM team for the weekend was Marilyn, Catherine, Helen, Barrie, Bill and Bob.  It was quite fun having the 3 Bs playing the roles of John Mark, Barnabas and Saul!  The team had a wonderful time working with the choir (made up of some Brixham folk who had had some rehearsals, a group from Yeovil, and a handful of other singers), with rehearsals for most of Saturday ahead of the performance on Sunday afternoon.

On Sunday morning the team led the morning service - Helen led the service and Roger preached, with contributions from the other team members.  Bill wasn't able to be part of the service as he had travelled home due to grandchild number 4 being born over the weekend.

The performance was a terrific success - the minister at the church gave the performers and audience a hilarious and enthusiastic welcome, and the downstairs was very full, with some people even sitting in the balcony.

We had a lovely message from Kathryn, the amazing local organiser:

'Thank you' seems very inadequate to tell you how we feel after your weekend with us here in Brixham! Everyone has been thrilled, inspired, encouraged and uplifted by your presence with us. The Spirit was certainly at work throughout the weekend and we certainly hope that Brixham Methodist Church will never be quite the same again!!!
You will be much in our thoughts and prayers as you continue your wonderful ministry - be encouraged - you are doing an amazing work! Thank you!

Just as Roger and Helen finished their performance of Barnabas in Brixham, it was time for Annie to begin conducting Saints Alive!

The Saints Alive Singers at Holy Trinity Eccleshall have been singing together for a number of years, and have regularly had visits from Annie and Helen to hold musical-in-a-day performances.  This time they were celebrating their 30th Anniversary and to celebrate they wanted to dedicate an evening service to a performance of the musical they had first learned together - Saints Alive.

Annie travelled up with helpers Jenny and Susan ready for a lovely lunch with the choir, and began rehearsals with the choir and local soloists.  Midway through the afternoon they were joined by Tim on drums and Michael on guitar, who worked alongside the local pianist, flautist and clarinettist to form wonderful band.

One of the exciting parts of the event was Annie being able to share some of the words of knowledge the EBRG housegroup had felt they had heard from God ahead of the day.  Several of the words were claimed, and a number of people were hugely encouraged by God's care for them.

It has always been a delight to visit the group in Eccleshall - long may it continue!  In her letter to CMM after the event, Hazel said that one of the adjectives used over and over again to describe the day was 'uplifting'.  Praise God, and well done to Annie and team.
Posted by Helen at 12:43