April started off a little sadly for CMM.  Overnight on Good Friday the organist at Helen's church, Margaret Dawson, passed away aged 94.  Of course this was sad for Helen and all at Saltley Methodist, but there was a further link to the ministry in that way back in the late 1950s Margaret had taught Roger to play piano.  She was an excellent musician, and even composed music herself for the church choir and special services.

On the Sunday after Easter, Roger took a team to Hinckley Methodist Church to lead a Jerusalem Joy day.  The team was mostly made up of instrumentalists, as many of the small solo roles were to be taken by local choir members.  The live band comprised of Phil Parkin (piano), Paul Herrington (keyboards), Ellen Rudge (trumpet), Amy Carter (clarinet and cello), Rachel Haddon (flute and oboe) and Alan Smith (drums).  As well as this amazing band, Simon Cooper took on the singing role of Jesus and Eddie Smith sang Pilot.  It was great having Jenny, Eddie's wife, taking part as well.

Simon is a former member of this church, and his sister Rachel was organising the day.  Before rehearsals began, there had been a coffee morning in the church raising money for Simon's mission organisation, Refreshment UK.

The choir did a terrific job - they had had a couple of rehearsals in advance, but then Roger and Amy worked with them some more during the day.  The performance itself was really great fun - a wonderful big audience and a very powerful message.  It was also fantastic using the new edition of the scores, including the new final song, Christ is Alive, with words by Chris Ellis.  This song first appeared in the Roger Jones Hymn Collection back in 1999, but we do not often hear of its use.  It is great to know that it will now be accessible to a greater number of people.

The very next day after Hinckley, there was a very special evening organised at Roger and Mary's Church, Lickey Parish Church.  Since Graham Allan's biography of Roger was published a year ago, we have been able to hold various evenings called 'Musical Man', where Roger shares some testimony, interspersed with songs from different musicals.  The Lickey social committee decided they wanted to hold one, so Roger took this opportunity to gather together soloists and instrumentalists from both CMM and Lickey Church, as well as the CMM Choir (who took up half of the church!).

Annie conducted the choir, and Helen interviewed Roger, and Roger, as well as talking about his story, was able to share very deeply about certain areas such as prayer ministry he had received from Wholeness through Christ, and grief.

It was an incredibly moving and powerful evening, and we are so thankful to all of those who played and sang.  We are also incredibly thankful for the hard work that Alison and Clive Rushton put into the evening, and the support of Roger's vicar Margaret.

Another highlight of April was heading back into the studio to record some of Roger's brand new Christmas songs.  Earlier in the month Roger had spent an afternoon with Helen and long-standing friend Margaret, specially to focus on two tracks - one solo for Helen to sing, and the other for Margaret to play an organ part.  The producer, Chris King, had managed to download samples from the Vienna Concert Hall Organ, which sound particularly spectacular.  On the Monday after Musical Man, Roger, Dave, Annie, Katie, Amy and Helen spent an afternoon at Chris' recording solos, unison work, descants and any songs that were just ladies.  Amy, Annie and Helen also put down some clarinet, viola and flute respectively.

Then later in the evening Jemma and Russ came to the studio.  They are from Sally's church, Zion, in Halesowen, and both young, terrific singers who have added some wonderful lively vocals to two of the tracks.

The next day it was all hands to the deck as the harmony group came into the studio to fill in all of the choral sections.  The group was directed by Helen, and comprised of Katie and Catherine on sop, Annie and Sarah on alto, Dave and Chris on tenor, and Paul and Phil on bass.  The group are always such a pleasure to work with, and they made a wonderful sound together.

Naturally, Roger took a lot of time off for the rest of the week, because by the end of it he had to travel up to Cumbria for a performance of Barnabas in Barrow-in-Furness.

Over the last few years, a wonderful friendship has sprung up between the choir in Barrow, and another choir in the St Helens/Haydock/Wigan area.  This has resulted in a choral exchange - the choir in Merseyside travelling up to Barrow for their performance, and the Barrow choir will travel to Haydock in June.

Roger's team included Sharon and Carol, who are CMM associates from those two choirs taking the lead female solos, and then Bill, Barrie and Alan on the male roles, and Marilyn and Gemma providing instrumental support.  Marilyn also assisted Roger with the choir training.

The performance was really very excellent, and was only spoiled by Barrie suffering from a fall in the car park afterwards, breaking his hand and damaging his teeth and lips.  Thankfully Barrie was looked after extremely well, and is now recovering.

It is such an honour to be able to meet and contribute to the lives of all of these wonderful choir members.  Huge thanks go to Sharon and her team for their excellent organisation, and to all who looked after the team so well.

The following weekend Helen and Annie were due to travel down to South Devon for a special Mary Magdalene weekend.  Sadly Helen wasn't very well, so Annie had to go on her own.  But she was not completely alone because the local organisers were friends from Lee Abbey - Sheila and Jim, and there were at least six Lee Abbey friends among the choir.

Sheila and Jim had put together an amazing group of soloists, several of whom were professional singers.  Sheila had also trained a group of children to dance during the instrumental piece 'Delivered', for which Jim played piano.

Annie had a wonderful time in Devon - the choir were excellent, and her main problem was coaxing them into being confident with the backing track.  Encouragement is a gift that Annie has in bucket-loads though, and everyone was very happy in time for the performance.

As Helen was supposed to be helping with the sound system, Jonathan very, very kindly volunteered to bring down his system for the performance, and he arrived after lunch on the Sunday ready to set up.  The performance was in the evening, and the church was completely packed out.

Huge thanks to Sheila and Jim, and we hope you enjoyed your well-earned recovery cruise!

The busy month of April was rounded off by Helen's weekend in Northampton.  For the first time ever, the Women's World Day of Prayer committee in England, Wales and Northern Ireland had decided to hold a special young women's conference.  The committee had heard about Helen as a worship leader following a Worship Works day in St Austell a couple of years ago, and the dates had been in the diary ever since then.

Being named as the keynote worship leader was a little scary, but Helen had a fabulous weekend.  There were 35 women present, and all were passionate about Jesus, prayer, and campaigning for women's causes around the world.  The keynote speaker was Ulrike Bechmann, a German academic theologian who currently works at the university of Gratz in Austria.  Her thoughts on next year's WWDP reading (the parable of the workers in the vineyard) were incredibly deep and thought-provoking.

Helen was able to include teaching on coming into the Most Holy Place in worship, as well as some thoughts about prophetic worship.  One of the other real joys was being able to sing over the women using songs such as Precious and Honoured and words given by God for the occasion.

If the committee decide to hold a similar conference in future, it is highly recommended! 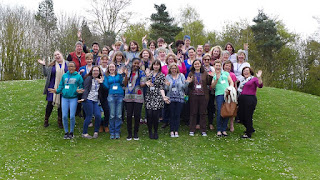