Barnabas on the road - Weston and Leicester

Just two weeks after the world premiere of Barnabas, it was time for the musical to go on the road.  First stop: Weston-super-Mare.

Over the years CMM has built up a lovely relationship with the folks in Weston, helped massively by strong connections there for Roger and Mary as well as for Annie.  This has led to CMM leading musicals there regularly, where Annie will train the choir for the whole of Saturday, and then after leading a service on Sunday morning, Roger leads another rehearsal before conducting the performance in the afternoon.

This time the scratch Weston choir were joined by other singers from nearby, including a choir from Yeovil.  The Caprione choir from Weston had already learned a couple of Barnabas songs for another event, so they also were a great help on the day.  A fantastic choir of 60 were there - a super choir!

The day at Clarence Park Baptist Church was organised by an amazing committed group of people including Kaye and Tim, Peter, Jo, Steve and Kevin among others.  They really went to town on publicity and gathered a great choir and audience as a result.

The CMM soloists were Ann and Amy (singing the full musical for the first time) as well as Richard, Devon and Bill.  Annie played her viola for the performance too, adding so much to the overall feel.  A number of other CMM friends were there too - associates and regular music week people - it was a great weekend.

Another highlight of the weekend was the morning service at Clarence Park Baptist.  Roger preached and Annie led worship.  The church and their pastor, Steve, have been so incredibly supportive and generous to the ministry.  Huge thanks go to all who were involved in the whole weekend.  It was a brilliant way to kick off Barnabas on tour! 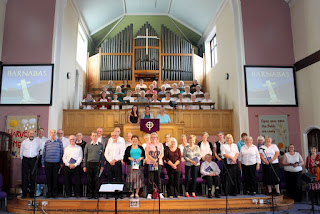 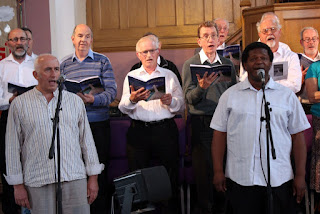 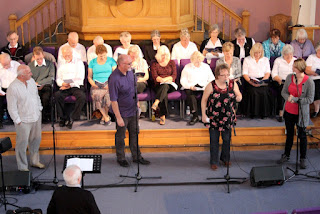 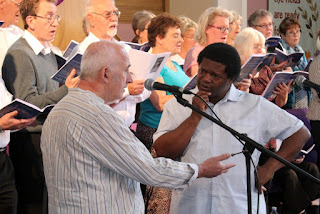 The second performance of Barnabas on the road came over a month later, at Christ Church URC, Dumbleton Avenue, in Leicester.  Leicester has always been a feature of our musical tours, and they were keen not to miss out this time.  Led by Alan Baum, a 40-strong choir was put together.  Barnabas has a couple of tricky songs in it, but the choir sailed through and were terrific.

Leicester is a close-to-home venue for all but two of our main soloists, so the full team were gathered together, along with Roger conducting and Helen on instruments.  There was a rehearsal on the Tuesday evening followed by the performance the following night.

It is always so lovely to return to Leicester and see so many familiar faces - not just from performances in previous years, but also friends and family of our many associates that come from the area.  Helen had so many people say 'Give our love to your mum and dad' that she had to take photos of them all!

The performance itself went exceptionally well - even more so because the venue had been sold out for weeks.  They gathered together every chair in the premises to fit in as many as possible - it really was a huge success.  But success isn't to be judged by bums on seats - the most important factor is whether or not God is moving in the hearts of the people there.  The minister at the church clearly thought so, and gave an altar call at the end!

Huge thanks go to Alan, Sheila and all of the helpers at Christ Church.  Another wonderful opportunity to spread the good news of Jesus.
Posted by Helen at 15:17