Here at CMM we're astonished at all that is going on with the ministry around the world.

Firstly, Roger received a facebook message from someone to say that his song, 'Come, see the beauty of the King' had been performed at the British Embassy in Cairo as part of their carol service.  So wonderful to hear of people being blessed by the music in what might be such a difficult situation.
Next, we received an email from our great friends Sugu and Jaya in Kerala in India:

"We are happy to announce that we are doing the Musical ‘The Inn Crowd’ on Saturday the 12th of December. The songs will be sung by the mothers of the children who come to our house Bible class. It will be accompanied by the Recorder Orchestra of children trained by Sugu.

2015 had been a difficult time for Sugu as he was admitted in the hospital three times.   But by the abundant Grace of God he has recovered and has started teaching Inn Crowd to the Instrumentalists and to the singers. We feel that doing ‘The Inn Crowd’ has helped him to recover physically, mentally and spiritually."

Tim also received a large order for Greater than Gold scores from Canada, so we are excited to hear of a choir working on the musical over there.

Not exactly international, but The Inn Crowd will also be performed in Holywood Parish Church in Belfast this weekend - great to hear from Deidre and the folks there. 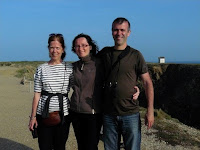 Then this morning we have heard from friends David, Gentiane and Anne-Marie in France.  We first met them at Lee Abbey this summer, and they thoroughly enjoyed the week.  They were particularly blessed by the song 'Let me see your face' and have since translated it into French.  Their email says they have sung it to friends, and even in a prison.  Amazing!

Finally, Roger, Mary, Devon and Mick have just been to Cyprus for a week in preparation for next year's Barnabas mission to the Island.  They had a great time taking part in a performance of Two Sisters and a Funeral in Paphos, holding two evenings with Devon, taking a service in Limassol, and also meeting with lots of different church leaders.

Excitement is really building for the mission there - there are performances of Barnabas planned for various venues on the Island:
Famagusta (11th November)
Kyrenia (12th November)
Larnaca (14th November)
Paphos (16th November)
Limassol (18th November - at St Barnabas' Church!)
Strovolos, Nicosia (20th November)
And this last performance in Nicosia will be a massed choirs finale.

Praise God for the wonderful opportunities that are opening around the world.
Posted by Helen at 11:05