It is the time of year where we hear from lots of you about how your performances have gone.  Here are a few bits and pieces of your comments:

This is from Paul at South Yardley, following our visit for Two Sisters:


One more story I need to share with everyone, especially as it ties in nicely with what Roger said at the Sunday service!
Last week I had a phone call from a lady asking for a couple of tickets, I said I'd deliver them and went over the following day. She was out so I came away and went back later on. She was still out and the phone just went through to the answering machine. I put the tickets in an envelope, scrawled a message saying she could pay for them at the show and left it at that.  This morning she phoned to say thank for leaving the tickets, she did turn up and she paid on arrival.
She then went on to say that she didn't normally go to such things and didn't expect much. At this point I began to wonder why she'd shown any interest in the first place! She also said that she'd found Church music to be so dull and boring and I was even more confused as to why she'd decided to come along! Then she said she'd had such a wonderful time, the lights, the music, the costumes, the songs, the drama etc - it was something she never expected to see and she'd had the most amazing experience.
It's often said that the Lord works in mysterious ways (in fact I find them to be completely bewildering at times!) but if we managed to reach out and make contact with this lady on so many levels then I think we all did a splendid job!
Cheers and thank you all again.
Paul

We had another email from the singers at South Yardley a few weeks later, as they went on to perform a different musical, Simeon, somewhere else:


I thought you might like to know that we’ve been very busy since Two Sisters; about two years ago I was chatting to Brian, the father of a chap I worked with, who looks after The Peoples Mission Hall, Netherton. Many moons ago they presented some of Roger’s early works, even performing at Dudley Town Hall, but with a changing congregation, the productions haven’t continued. Brian was keen to try and regenerate the idea and asked if the In Crowd Singers would be able to visit and present one of the musicals. Of course it all took ages to set up and find mutually convenient dates but at long last on Saturday December 1st a coach load of In Crowd Singers journeyed to Netherton to present Simeon which we’d performed the previous year at Digbeth. 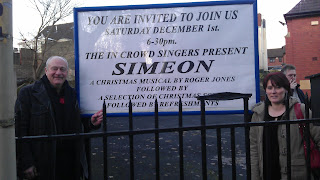 A huge sign greeted us and we were well looked after with refreshments during the afternoon and after the show. Apart from Simeon we sang some Christmas songs and a few carols which all helped to get their (and our!)  Advent season off to a great start. The whole evening was very well received and, certainly a first for us, we were asked to do an encore – song number 2, ‘Why Should I be So Favoured’! Reactions afterwards from the congregation were superb, warm and friendly people who, as with Two Sisters, had all enjoyed the evening on many different levels. They took a collection which was handed to us and which we’ve sent on to our chosen charities. We’ve been invited back to Netherton next year and they’ll be arranging an expedition of people to come to Birmingham to see our next production.
As a result of all this, we’re putting the whole evening on again this Saturday at St.Cyprian Hay Mills, Simeon, songs and carols , not sure if we’ll be asked for an encore this time but at least we know people will have a great evening!!
It’s said that music is a very powerful force, I think we’re only just beginning to realise how powerful that force is so please send our thanks to Roger & Co for writing such amazing material.

We have also heard briefly from The East Coast Churches Choir, who performed Rock at the Spa Theatre in Scarborough - a very big venue!  Roger went to visit them to see how their rehearsals were going.


Please could you let Roger know that the ROCK musical was well received when performed in the local theatre. We had a dress rehearsal on the Tuesday with the Spa Theatre staff who sorted out the sound and the lighting. This gave the show an added dimension. We ended up with a 12 piece band which worked very well.
The comments we received were most encouraging. The scene with Suzanna singing "Just as I am" was most moving. We had a good number of non-Christians in the audience on both nights and speaking with some of them afterwards they were most moved by the message of the musical.

We were also sent some wonderful pictures from Stokesley, in the North East.  They performed While Shepherds Watched, as it was the 25th anniversary of their original performances.  This is what they had to say: 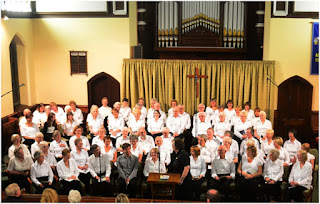 Hope your WSW at the weekend is as well received as ours was!! A Choir of approx.70 sang to an audience of over a hundred and a very happy, but thought provoking time was had by all.
Incidentally, all the soloists were the original ones who sang in our own productions at Stokesley following your Middlesbrough Town Hall one with the exception of "Levi" who sadly has since died. 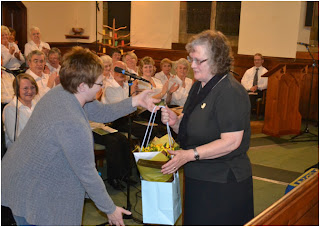 Thank you so much to everyone - keep us informed of what you are up to - we love to hear from you!