Two Sisters on the road again! 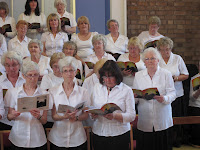 Last week Roger, Helen, Amy, Emily, Andrew and Richard travelled up to Hull for a couple of days for Two Sisters.  We had been invited by our friend Barrie Renwick to come and put on a performance at Willerby Methodist Church on the outskirts of Hull, and as we put it in the diary, he sprang into action getting other people involved.  Two choirs trained for the production - East Riding trained by Jean Gray, and West Hull trained by Phil Davison.  Phil also joined forces with Barrie to be a baddie - singing songs 6 and 11. 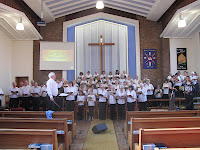 On Monday evening we arrived at the church ready for a rehearsal, and spent a good bit of time setting up, wonderfully assisted by Stuart who was to be the technician for the rehearsal and the performance.  The choir were enormous and only just fitted in - over 60 of them, and they looked brilliant!  The rehearsal went really well - the choir had worked hard and sounded great, so Roger was able to take a bit more time with some Bible teaching as part of the rehearsal.  Sadly as the rehearsal went by it became clear that Andrew was not at all well with a very bad cold indeed.  When he woke up the following morning he decided it was best that he did not sing - so Barrie stepped up to play the role of Jesus, and Helen played his baddie role instead - which was quite interesting as the two 'baddie' songs are usually only men! 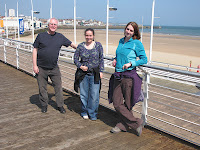 On Tuesday Amy, Roger and Helen had a bit of time off (Richard had gone back to work and Emily was visiting a friend in Hull) and took full advantage of the sunshine and headed to Bridlington.  It was a beautiful day, and we enjoyed lunch on the harbour as well as a stroll on the beach and a drink in the Spa theatre.  After a lovely early evening meal at Phil and Liz's house we arrived at the church ready for the performance.

The church was absolutely packed out, and the performance went very well indeed.  Barrie did a great job stepping into the Jesus role.  We were also really blessed by the minister, who mentioned that he had received his call to the ministry while taking part in Snakes and Ladders a few years ago.

It was a wonderful couple of days - huge thanks go to the wonderful people of Hull and its surrounds for making us so welcome.