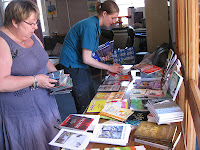 After our visit to Hull, a CMM team were on the road again, this time to Crediton in Devon.  This time the team comprised of Roger, Kaye, Amy, Helen, Bill (with Barbara) and Bob.  The team travelled down (or up depending on where they were coming from!) on a blazing hot Saturday, and arrived at the church in plenty of time to set up and lead the first rehearsal before lunch.  Helen led a warm up and some worship, and Roger led a bit of rehearsing and bible teaching. 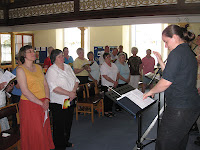 The choir were made up of a mixture of singers - mostly from West Devon music ministry and also a handful from Purple Harmony in Yeovil.  They had clearly all been trained really well and made a fantastic sound.  We were blessed by a good sound system and technician, and once set up everything went really smoothly. 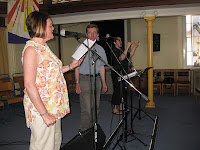 Lunch was great, and many of us ate it outside the church on the steps enjoying the sunshine.  After lunch we got down to rehearsing again, and were delighted to have plenty of time in order to really polish the music.  Kaye took the part of Mary, Amy was Martha, Bill was Lazarus and Bob Jesus.  Helen played her instruments and sang various bit parts.

The performance was once again in front of a packed church and appreciative audience.  We were given a wonderful welcome and things went really well.  The only hiccough occurred in 'O the deep, deep love of Jesus' where the backing track suddenly cut out.  Amy dashed to the piano and managed to keep the song going.  At the end of the song is space for prophecy, and Helen and Amy managed to swap places on the keyboard so Amy could go and sing what she felt God was saying.  It was quite an exciting moment!

The following morning we returned to the church - Crediton Congregational Church - to take part in the morning service.  They already had their own excellent musicians, so Roger spoke, and then we had a ministry time which flowed into communion which Helen led.  It was very moving and people responded well, with a few coming forward for prayer at the end. 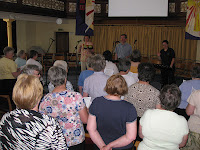 It was wonderful to be able to minister both through the production and in the service.  Thank God for his blessings.  We have an amazing God who moves among us in so many ways - speaking, bringing healing, blessing and so much more! 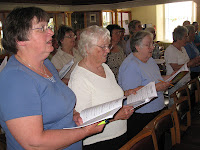