Spring bank holiday week at the end of May is the traditional time for CMM to get on the road up north to Abbot Hall, Kent's Bank, near Grange-over-Sands. Abbot Hall is one of the Christian Guild hotels, and CMM has been holding a half term music week there now for quite a few years.
This year Roger, Mary, Annie, Sharon, Christine and Marion were the CMM team for the week. Sharon lives nearby and trains the Barrow-in-Furness choir, so she has been our regular choir trainer at Grange. Christine is a new addition to the CMM associates - she is a flute/clarinet teacher, and really great to have around. Carole dropped in a couple of times with young Hannah, and Poppy also travelled up to Cumbria, but she spent the week holidaying with Barbara and Reg in Grange, and sent Roger and Mary plenty of postcards to let them know what she was up to.
The musical of the year was Two Sisters and a Funeral. This was the first holiday week using the musical as a base, so Roger had to work extra hard preparing his Bible teaching for each of the morning's sessions. Roger was very pleased with how the Bible teaching went - he
focused on each one of Mary, Martha and Lazarus for the three sessions, drawing out some strong messages for the guests.
Other highlights of the week included Annie's talk in the Sunday morning service, and Sharon singing a solo - 'Song' from Karl Jenkins' Gloria.
Prayer ministry was another vital part of the week, and the team were delighted by the way God led them to pray with certain people. 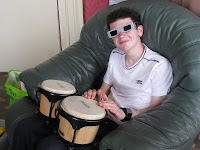 The performance itself on the Friday night went amazingly well. The orchestra were fantastic, and the choir and soloists did a brilliant job. Roger was particularly delighted with Kevin, who had only sung a solo for the first time last year, and this year not only sang solo, but also sang out a prophecy at the end of song 10. In the past Jaime had been on team playing drums, but instead this year the only drummer was Anthony, and he was absolutely brilliant on the bongos.
Well done everyone!
Posted by Helen at 10:36