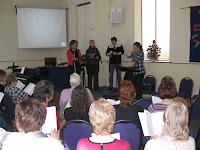 A week after our exploits in Sheffield, we travelled south east from Birmingham to Witney, a town to the west of Oxford.  We have often visited Witney over the years as a group there led by Paul Herrington has often performed Roger's musicals. 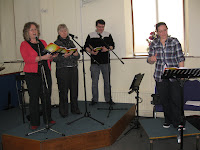 The choir had been rehearsing for several weeks, although there were a few newcomers on the day.  A brilliant part of the day was that time had been left in the programme for Roger to be able to do some teaching on the theme of the musical, and to really invest in the choir. 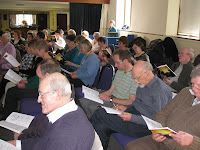 Before and after lunch Helen and Annie took some sectionals - Helen with the ladies downstairs and Annie with the guys upstairs.  The soloists divided between the two rooms - this time we had Martin as Lazarus, Phil as Jesus, Caroline as Mary and Wendy as Martha.  In the performance we were joined by two local soloists who took the baddie parts, and Helen and Annie played their instruments. 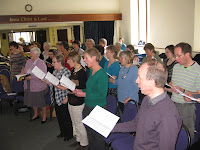 After the sectionals, Roger led a creative workshop, which added an extra dimension to the day ahead of the runthrough in the afternoon.  We had a wonderful tea with the choir and then tried to make as much room as possible for the audience.  The room was absolutely packed, with standing room only, which was a fantastic end to the day. 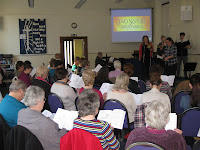 Thanks so much to Paul and also to Shirley Enoch for all their work on the day and before.  The choir are learning Snakes and Ladders for Paul's swansong later in the year.  Hopefully we will be able to get the dates of their performances up on the blog before long.
Posted by Helen at 13:50