An Evening with Michael Card 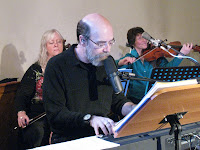 A couple of months ago while on the beach in Weston, Roger had a surprise phone call from a member of Michael Card's team to say that there was a spare date in his tour schedule, and would we like to host him.  Roger's instant answer was yes, and then the office staff got down to some seriously hard work getting it all off the ground!

Michael is a wonderful singer-songwriter, well known for songs such as El Shaddai and Immanuel.  He has many fans in Christ Church, and so they were delighted to have him come. 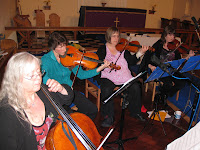 Annie gathered together an amazing string quartet made up of herself and three players from the CBSO - Libby, Heather and Corinne.  The strings added a huge amount to the concert and made it incredibly special. 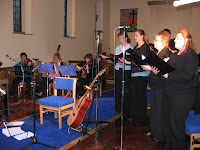 Helen sorted out a close harmony group, which involved Miriam and Ann on soprano (some of which was incredibly high), Catherine and Amy on alto, Helen and Tim on tenor, and Paul and Richard on bass.  Richard is a massive fan of Michael Card, so it was great to have him singing with us - he worked incredibly hard to learn his part, which was fantastic.  We were also supported by Martin who did a wonderful job setting up the sound. 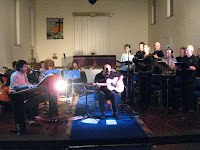 Michael brought with him Ron on sound, Gordon his tour organiser, and Scott his musical director.  Scott played piano for many of the songs, and Michael played guitar or piano, or just sang.  His guitar skills were mind-boggling as he plays a right-handed strung guitar left handed!

The evening was themed around Easter, beginning and ending with the song 'Only his wounds'.  There were a couple of really moving songs such as 'Ride on to die', 'Tears of the world' and 'Why', and a really special moment where the congregation joined in with the song 'Immanuel'. 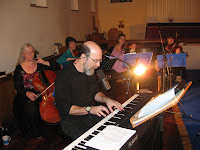 Organising the concert was hard work, but very rewarding, and the almost sell-out audience were very appreciated.  Hopefully in future if we have another such event we will have longer to get the word out!
Posted by Helen at 14:20