A Week in the Wye Valley

In February we had our first music week of the year.  This time it was a music in worship week, similar to the week at Whitby last year, and it was at Lindors Hotel, near St. Briavel's on the Welsh border.


The team for the week was Roger, Mike and Barbara Rowarth, Helen, and in a real treat for Helen, her two sisters Deb and Miriam, with some wonderful support from Deb's husband Jon and their daughter 18 month old Bethan.  We had no phone signal for the week, so Helen sent email updates to EBRG each night to let them know how it was going.  Here are some edited highlights:


Day 1:
The journey down to Lindors was fine - only an hour and a half.  There's about 20 here for the week.  This evening Roger got them all to share about what they do worship-wise, and what they are expecting from the week.  There aren't any who are just here for a holiday - they are here to learn, and to experience more of God, which is fantastic.  We have several musicians, several who are trained worship leaders in the Methodist Church (which basically means they are trained to lead the rest of a service apart from the sermon), we have a group from a parish in the Lakes (Roger led their weekend away two years ago, and last summer Annie went with Martin Cavendar to lead it - they are really hoping to learn about leaving space in worship for the Holy Spirit), and then we have three Welsh pentecostals who love worshipping.


Had another good day at Lindors.
One of the members of staff has her mum living nearby, who has been to a couple of our Lee Abbey weeks.  She rang her mum, who after being assured she would be allowed, has come to every session today!
The first session this morning seemed to be well received - it didn't really lead into any ministry, but was just a kind of overview about being a worshipper.  Roger will get down to some of the nitty gritty from tomorrow onwards.  The workshop was fun - people were very happy calling out answers, and even though Roger went very off topic and ended up missing out half of the session, it was a good (God) digression and I think people received a lot.
Mike and Barbara led a Wholeness Through Christ introductory evening, which seemed to strike a chord in quite a few people, so hopefully it has set the tone for the week and they will follow up by asking for prayer.
Day 3:
A quick email tonight as I'm typing on my phone...


Miriam led worship really well, which was great. It isn't a tough job though as everyone here is up for it!


Roger's session on Mary went down really well- he majored on the bit about being overshadowed by the Holy Spirit. In the workshop that followed  stuck to his plan :-) and got them all thinking about how they would lead a praise block. They are all very willing to join in.


Mike and Barbara had 3 prayer ministry appointments this afternoon, and also had one very deep one yesterday. Pray for stamina and strength for them.


This evening was good fun. I got them all singing delirious songs and thinking about evangelism. Deb and Jon did a really funny sketch too.


Another late night email from my phone.
This morning was an interesting session. Roger spoke clearly and uncompromisingly about demons and the power of praise and worship in demolishing strongholds. The tricky thing was that some people who were day visitors and new to us picked this session to turn up. Roger could easily have softened the message, but he didn't, and God really blessed the session. Not many are receiving prayer at the end of the morning sessions, but plenty are seeking out private prayer ministry at other times which is good.
Mike, Barbara and Roger all were involved with prayer ministry this afternoon.
This evening was very special. Roger led the evening and shared quite a bit of his story, which included some hard things about grieving. A lot of people were really touched.
Day 5: 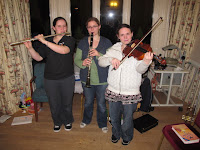 Had an excellent final day.  Roger spoke about Peter and the mount of transfiguration - we have to allow God to take us up the mountain in worship, and then allow him to take us down again ready to minister wherever he puts us.  Obviously there was a lot more to it than that, but you get the gist.  At the end we simply spent time in God's
presence - again, not a lot of ministry needed, but people were very open to receiving.

The Holy Spirit workshop went well - everyone got into groups and had a go.  There was even a spot of healing, so praise God for that.

The evening was very special. We had a long time of worship, and then Roger spoke about worship that transforms.  We shared bread and wine, and then Mike and Barbara prayed for everyone and anointed them
with oil.  There was a tremendous sense of love and unity within the group.