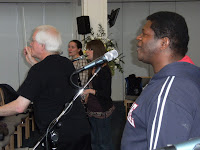 On Saturday night we held the next in our series of Two Sisters and a Funeral performances.  This time we were at Trinity Methodist Church in Kidderminster, which has recently been rebuilt following a fire and is very beautiful inside.

The New Life Together Choir in Kidderminster are a wonderful group who were formed 25 years ago to put on a performance of From Pharaoh to Freedom at Kidderminster Town Hall.  Roger and Mary can remember going to watch and sitting up in the balcony.  So this was a very special evening as the choir were celebrating their silver anniversary together - including a lovely cake! 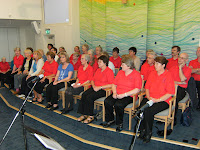 As we were in Kidderminster we were privileged to have a cameo from Simon and Louise Gudger, who played the parts of Jesus and Martha respectively.  Simon and Lou have been less able to spend time with CMM since having children and Simon becoming a Baptist pastor in Kidderminster.  It was wonderful to have them, and they had worked really hard learning the different parts.

The rest of the CMM team were Devon playing the part of Lazarus, Helen as Mary, and then Jonathan and Richard as baddies and goodies, depending on the song. 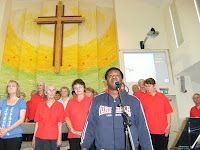 The choir were absolutely fantastic - they sounded wonderful, and particular congratulations go to the men, who despite being very outnumbered produced a great sound that balanced beautifully.  Choir trainer Carole had done a great job. 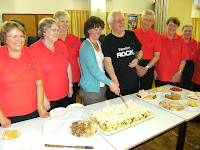 The performance went really well - and the church was absolutely packed.  They had to open up the side doors and sit more people in an overflow area.  Well done to Sue, Katy, Carole, and all in the New Life Together Choir for their hard work.
Posted by Helen at 10:42