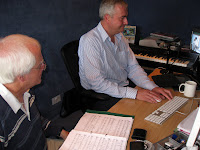 For two days in the middle ofSeptember, Roger went in to Chris King's recording studio to lay down the main vocals for the new album. It was a really couple of days, and we are delighted with the results.
Emily played the part of Mary, Aly the part of Martha, Martin the part of Jesus and Devon the part of Lazarus. It is fantastic to have such a young (on the whole!) cast. Some of the highlights of the recording include Emily and Martin's duet in 'Sitting at your feet', Aly singing in 'Abide with me' and Devon's work in 'Oh the deep, deep love of Jesus'.
The four main parts weren't the only soloists to record. There were also two ladies - Amy and Caroline, who came to record some extra bits and pieces. They recorded a verse each in 'Jesus comes riding in to town' as well as some parts of the opening song. 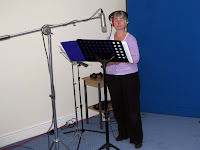 Amy and Caroline were joined by a group of men - Jonathan, Bill, Pete and Richard to record the male 'baddie' parts. There are two songs which require some priests who are upset about what Jesus is up to which have been written by Tim specially for the musical. The guys sound like a fantastic rabble - and they sang really well too! 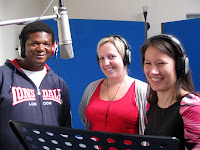 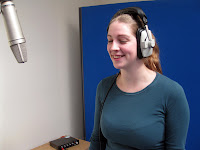 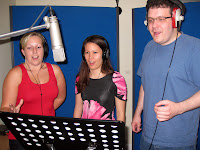 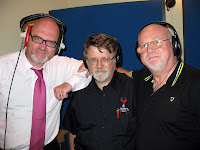