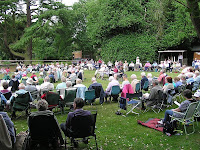 On Sunday we were honoured to be invited to lead worship at this year's Garden Praise at Middleton Hall, near Tamworth. Garden Praise is organised every year by Sutton Coldfield Churches Together, and is a fantastic event. 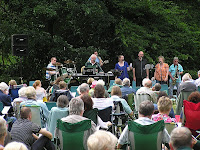 In the grounds of Middleton Hall there is a lovely space surrounded by trees which creates a bit of a natural amphitheatre, and there is space for 2-300 people. We had a small stage on which we managed to put Roger on keyboard, Tim on drums and Helen on guitar (Helen had lost her voice so couldn't sing). Then next to the stage we had a row of microphones for Ann Steer, Amy Carter and Richard Harvey. We were also joined by Mick on saxophone - we'd never met him before, but he was great. 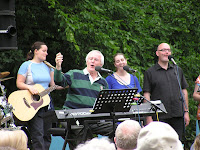 Lots of people came - easily over 250, and enjoyed the sunshine, sitting on their deckchairs. The CMM team led some worship, including a few of Roger's songs, and then Roger spoke.

It was a fantastic event, and a real honour to have been invited to ta 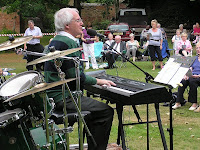 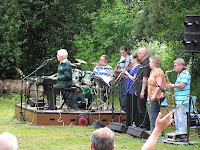