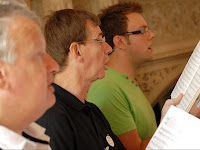 The annual CMM music week at Lee Abbey in North Devon was a great success once again. This year's musical was From Pharaoh to Freedom, and the full house at Lee Abbey took to it with relish. The choir
and the orchestra were smaller than usual, but the audience was therefore quite a bit bigger. 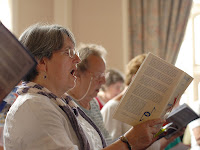 The choir was led by Paul Herrington, who has been involved with CMM music weeks at Lee Abbey for several years. Paul did a fantastic job with the choir and the soloists,
who all picked up the music very
quickly. 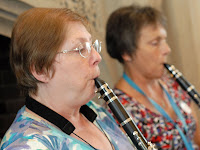 Annie once again was in charge of the orchestra, and she had a lovely group to work with, including an excellent string section. They were also brilliantly supported by a drummer from the Lee Abbey Community, which really added to the performance.
Although the choir and the orchestra were perhaps a little smaller than in the past, there was no let-up for the team. One of the features of the week was the amount of prayer ministry which occurred - God was clearly using Roger's teaching and all of the worship sessions to bless people with more of His Holy Spirit. 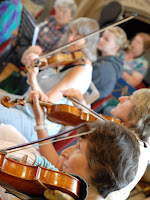 We had a lovely email from Sue in Derbyshire after the week:

I just wanted to drop you a quick note to say how much we enjoyed last week at Lee Abbey. I thought the musical was fantastic and despite not having sung in a choir since I was 18, I thoroughly enjoyed testing my sight reading skills again. We listened to the CD all the way home to Derbyshire and reminded ourselves of the great time we had.

Roger, you’re obviously in the perfect job given your amazing musical talent and gifts in the way that you communicate with people. It was delight to spend the week with you.