Apologies for not writing my blog in June, it has been a rather busy and testing couple of months.
During the course of June I managed to fit quite a lot in.  Firstly finishing off a promotional video for Pharisee (watch this space).  It has taken me a while to get this done as I have been trying to get it all to fit in time with the music that I’ve created which means changing the length of how long the pictures are shown individually - this takes loads of time!

I have slowly been arranging ‘God is our Shelter and Strength’ and getting the piano part done. The vocals are finished and so I have now just got to fit the piano part around it and then it will all be finished.

Throughout June and July, we had 5 of our CMM Choir Concerts, all of them went very well! The soloists were brilliant, they worked hard, and we had some great audiences. I played for 3 of the 5 concerts as I was then struggling to play with my shoulder.

For the Torn Curtain recording, the CMM Choir and others met up at Christ Church for a SATB recording for the CD. The recording was strange as once we had learnt the little snippets, we recorded them, but only Helen, Roger or Annie could be able to hear the backing track. It went very well, and it was good to be involved in the recording. We even got a little certificate that says we have been involved in the recording haha... I had a good time doing it and I do have some pictures on my camera which will eventually make its way to the CMM page haha.

On the 26th June I finally had my shoulder surgery. I had a subacromial decompression of the shoulder joint, so basically, they shaved off some of the bone of my shoulder so that eventually I will be able to lift my arm again and play my instruments comfortably. It has been a difficult few weeks as the physio exercises have been tough but they are getting easier. I now have more movement than before the surgery which is great! It is still very painful to move around but with the exercises, I’m making slow progress. 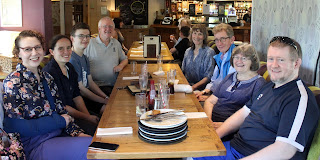 Since having the surgery, I was signed off work for 3 weeks to rest and recuperate after the operation. Most who know me know that the word ‘rest’ does not really exist in my vocabulary haha... I have had to have so much patience with it as I struggled to do the simplest tasks... dressing myself, opening things, and eating. The day after the op, I met up with CMM office to go out for a meal for Helen's birthday which was good. It was good to get out and the restaurant were brilliant as they cut my food up for me XD. It was brilliant to be out with everyone and have a good laugh. And then on the Friday I went up to the recording studio with Roger to go and see how things were being done for the recording of Torn Curtain, it was interesting to see all the equipment being used and hearing the soloists recording their bits.

In these 3 weeks off I was forced to rest as I picked-up gastroenteritis from somewhere and was very poorly the week after my op for two weeks. Also, during that time, I had to pack up and move to a new house which went a lot smoother than I thought it would have. Alison and Clive were brilliant helping me move as I’m still not allowed to lift anything with my right arm. As well as that Clive and myself went to meet my dad in Manchester to collect stuff for moving which was brill. Meeting in the middle meant my dad could get back quicker to get to bed after doing a night shift haha. I am now settled in, unpacked and getting used to the area.

Due to moving I am now very far away from train stations, but Alison kindly donated her bike to me so I can get around a bit easier. So, for about a week I have been cycling everywhere!  It is making my shoulder slightly sore but it’s a lot easier and cheaper to get around now. On Sunday I cycled all the way the church which took about an hour, then back to the city to choir and then on to Birmingham Cathedral for a service ‘To Celebrate Reader Ministry on the 50th Anniversary of Women being Admitted as Readers’ with Roger and CMM which was a really good service! It was interesting to hear about it all and be a part of the choir that were singing for the service 😊.

I am in the process of sorting all my paperwork and maths skills test out for starting University PGCE in September. I had my interview in June and got offered a place at Birmingham City University to study for my PGCE with SEN (Special Educational Needs) as my specialism! I am so excited to start teaching! It’s going to be a tough year, but I have got an amazing crowd of friends and support system here in Birmingham. They’re all amazing people and I don’t know what I’d do without them!
This week has officially been my last week in work. It feels so surreal to have finished! This year has gone so quickly! I have absolutely loved being with the CMM office staff, they have helped me in more ways than I can say!

This year has helped me grow so much in confidence, mental strength, self-worth and I’m physically better as well. All the different events this year have been challenging but good for me as I have been able to test myself. I have done many things this year that I didn’t think I’d be able to do but everyone here has been so encouraging, helpful and given me so much strength and confidence to do anything I am challenged with.

Also, God Bless you all - you’ve had to put up with my essay long blogs all year! I’m sure I will see people around the country at various gigs throughout the years to come. It has been a great year and I am looking forward to what the future has to offer.