Even though I have had a couple of weeks off for Easter, it has been as ever, a rather busy month. I have fitted a lot more into this month than I thought possible with work and with my personal life.

The first couple of weeks with work were busy with advertising and contacting churches to advertise for CMM Choir's upcoming concerts throughout May and June. I have had good responses from churches which has been amazing! We have just 7 more performances to go!  For these concerts I am playing the arrangement I have done for Flute and Clarinet, including parts from the violins, cellos, violas, trumpet and piano parts. It took a while, but it is all finished and ready for the concerts now.

As part of being at Lickey Parish Church, we went for a weekend away with other churches in the area to be together and have a look into the book of Ruth, which was good, discussing it together was great for everyone. I helped with the worship leading on the Friday, Saturday and Sunday which was really rewarding, people who attended said that it added a certain something to the worship blocks to have the flute. As many people will know, when you're part of a church, it can be difficult to get to know the members of the congregation due to being busy before the service, and then being busy at the end of the service, so I personally don't get all that much time to actually socialise with church members as much as I would like to. So, I felt that the weekend was important as it gave us a chance to get to know each other properly and socialise in the afternoons and evenings which was brilliant.
I attended prayers both Saturday and Sunday, and I felt that I could just sit and be with God, which with my lifestyle, I don't always get chance to sit and just be with God.

After a busy weekend away with church I went straight to West Bromwich Town Hall for a full-dress rehearsal for The People's Orchestra Concert on the Sunday night. As well as the Orchestra, the choir were singing in this concert, and even though they only had a few weeks rehearsal, it was fabulous! It was a very busy afternoon and evening. The concert overall went very well, the set that we did was phenomenal! I was left with a buzz of adrenaline - that's when you know it has been a good evening. It meant a lot to me as well, because I lost a friend a couple of months ago who absolutely loved his video games, so it was good to be able to play it for him in his honour. It was nice as well, as I had my family attend from Cumbria and a couple of friends from Manchester. For my brothers, it was probably the first orchestra concert they have seen me perform in, it was nice knowing they enjoyed it. We got lots of great comments on the concert and have been asked to do it again in September, which is fantastic! 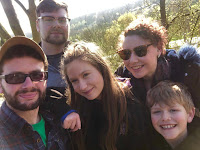 Once that had all finished, and I got home there was no resting time; I had to pack ready to go on holiday again.  I went with my family down to Kent to Port Lympne Hotel and Resort/Safari Park, but sadly as Cumbria and the Isle of Wight have different Easter Holidays to Birmingham schools, I was still in term time, so I had to leave a day early to be back at school before they broke up for Easter. The resort was brilliant, we were in a lodge that had the most spectacular view, welcomed with a glass of prosecco! The resort was huge, for some of it we had to go and see the animals via a tour truck as there are big chunks of the park that you're not allowed to walk around due to the animals being out in the open. It was good to be able to spend some time with family that I don't see very often. Especially my eldest brother as he doesn't usually come on the holidays with us and I don't often get time to go back up to Cumbria, so I only see him a handful of times throughout the year so it was great to spend more than just a couple of hours with him and actually get to chat. We also got to go out to a novel restaurant where we got to choose the components for our meal and then actually cook it ourselves, it was very strange, but my cousins absolutely loved doing it and it was really fun. As holidays go, it was fun to be able to do have lots to do, have new experiences and play some games in the evening too. It was nice to go and enjoy myself and have a little break :).

Before going on the Church Weekend away, school did a production of Noah and the floating Zoo which was amazing! It was a whole school production from Nursery right through to year 6. They had such a fabulous time doing it and even the week later when they could relax a bit before Easter, they were still singing it around school. We got to have a relaxed afternoon on the Friday as we sat and watched the whole production as a lot of the time the children were backstage when they weren't performing so they did have chance to sit and watch it, so they all enjoyed watching themselves on stage, and were all having a great time singing along. It was a very nice and relaxed way to end the term for two weeks.
I am preparing myself to go back this week! Only a short time before the next week off.

You'll be glad to know that before I went back up to Cumbria that I finished my PGCE application! I am now just waiting on one reference to come in and then the application can be sent off, I now just must start panicking about the maths skills test and the interviews.
All fingers and toes are crossed....

Following all of that, we did a Worship Works gig up in Windermere in Cumbria, we had a brilliant team for this. The church members that we had there were very open to new ideas of how to lead worship, what songs to put in a worship block and how to just be with God. I really enjoyed the day, and even though I have worked on many of these days, they are all different and amazing to be on team for.

After the day had finished, I made the most of being in Cumbria.  I went for a meal with my family before going to see a couple of friends in the production of Ruddigore, which was fantastic. It was great to go and see it to support friends and it was the first Gilbert and Sullivan Production I performed in years ago.  As I was then on my Easter holidays I decided to stay up in Cumbria and do a bit of work at Lambert Manor (formerly Abbot Hall). I worked in Housekeeping, Restaurant, and a little bit in Reception. I had a good time, and it was lovely to catch up with people from work. After saying I was only down for a few shifts, I ended working 80 hours in just over a week! I got to see a few people throughout the week, but with the hours, I didn't have as much spare time to relax as I'd have liked. So, when I got back to Birmingham on the Monday evening, I had travelled down in First Class, relaxed on the train and looked forward to going back.

Coming back into the office on the Tuesday felt very good, as I wasn't running around like a headless chicken in a hotel... got some more done of the promo video for Pharisee I'm working on. I now just need to put it together and make sure it is all in time and runs how I want it to. At the weekend we were in Hinckley, doing Rogers 'From Pharaoh to Freedom' musical in a day. It was a great day; we had a brilliant choir and the team that went to it was fantastic. We had a good little set up for the orchestra in which Rachel (previous intern) was also there on team playing oboe. The day went very well, and we had a few of those light bulb moments where something in the musical spoke to choir members and audience which is amazing. The day also gave me chance to go through my arrangement for Flute and Clarinet ready for the CMM Choir productions which was great. We must have run it through at least 3 times before the performance, so lots of practise time. Although by the end of the day we were all exhausted and my lip had gone because of switching between instruments so much.

The last thing that I would like to mention is that when I ran church Sunday school, we did lots of great activities, but the one I found all the children liked the best was making Prayer Plaits. The three strands represent Peace, Hope and Confidence. They made them with partners and said a prayer for their partner whilst they were making the Plaits, it was amazing to see, and they took such pride in wearing them afterwards. I think this would be something anyone could do, I wear mine with pride everyday and never forget its significance.

I said it was a busy month... Apologies for the length, but I’m sure you’re used to me doing lots of writing!