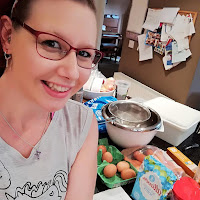 So, I’ve now been working as an intern for CMM for a month now which has completely flown by! They have kept me extremely busy… I’ve been set various tasks in the office and been sent on five events which have been really fun.

I have been composing/arranging a new Choral version of God is our shelter and strength, which I am still on task with, creating new harmonies for the choir and a more detailed piano score. I have done composing before, but I haven’t done it for a long time, so it is certainly challenging me 😊.

I had a great time creating a new Spotify playlist of my favourite CMM tracks which originally Helen asked for around an hour, but by the time I had created my list, and put it into Spotify it came out at just over two hours…but because I have done all of Roger’s musicals…doing just an hour would have proven quite hard, but it gives you all a great long playlist to listen to!

Annie and Roger also gave me a challenge of running the CMM choir rehearsal the other week. I have taught choirs before, but never a full rehearsal. I was extremely nervous but rose to the challenge. Roger was there, which made it even more nerve wracking, but once I got started and the choir became used to me, I felt a bit more comfortable. We managed to get through quite a few tracks in detail, and sing them with more confidence which made me feel better as I knew then that my teaching had paid off well. Since then, I have taught the choir a few more times and I felt a lot better, now know how the choir works better and in one of the songs I taught, they managed to get the rhythm perfect, which I was so proud of! Annie was very shocked and amazed that they all did it! XD.

As well as doing God is our shelter and strength, I have done transpositions of a new song Roger wants to do and some clarinet parts for Simeon and Songs of Christmas. Alongside that I have done a music video for the music week at Abbot Hall in Grange-over-sands which is now uploaded onto YouTube, I hit difficulties with getting the pictures to change on the beat and also for them to be on screen for a good length of time. It all worked out and is up and ready for public viewing on CMM YouTube channel.

I also had the extreme pleasure of being invited to an EBRG meeting. Where the members prayed for me and asked the Holy Spirit to come upon me. It was a lovely evening, even though I was nervous as I’ve never really done much of that before, it was such a blessing as I got many messages from God and had a conversation with Jesus which was both very difficult but eye opening. They are all amazing people and I feel so blessed to be here this year.

As you can see, they have kept me insanely busy, which is good! Haha.

In addition to all the CMM office stuff, I went on the five events, which I helped prepare instrumental music and book stall items. The first one I went on was a musical in a day with Annie doing Jairus’ Daughter. I played in the orchestra along with six others, playing saxophone, clarinet and adding in harmony in other instrumental parts. I love Jairus’ Daughter, it’s one of my favourites. The next event I did was a church service, playing clarinet for, although I am used to playing in church and improvising, I hadn’t done much improvising on my clarinet as I am used to playing flute but due to medical reasons I cannot play flute for a while, so I didn’t have much of an option. After a couple of songs, I settled into it but it was really quite challenging…

The next CMM event was an evening service at a retirement home, with Roger doing some interviews for his Heart and Soul radio channel. This was a lovely evening, everyone there was really nice and welcoming, they were lovely to talk to. It was also interesting to see how Roger does his interviews and how it all fits in with the service, what sort of questions he asks and how he responds. It was really interesting to hear from the interviewees.

The penultimate event I went on was a Musical Man evening with Roger and a team in Dunstable, we rehearsed during the afternoon with two choirs, team and then fitting it all together. I helped prepare music for this, as it was a bit of a mixture of stuff that we were doing. It was a long afternoon and a really good evening. One of the team interviewed Roger and seeing that was really helpful to see the structure of how everything works and fits in with the interview questions and the music around it.

The last event I went on was this weekend just gone, I travelled down to Welshpool with Annie and met up with a massive team for lunch when we got there. There was a super choir and a massive team for the orchestra, we did Jairus’ Daughter again which I loved! Even though I only did it a couple of weeks ago, it was all new because we had such a different set up of people. I played a lot more saxophone this time during the day, as we had clarinet, flute, trumpet, violin, cello and guitars covered. I did say we had a big team…so when I wasn’t on sax, I added some harmony lines in from the clarinet and flute parts, so bit of transposing needed… The performance was brilliant as was the service on the Sunday morning. It was a seamless service, they have taken on board a lot from when CMM were last there, like the praise block. It was a big, bright open space and the atmosphere and spiritual feeling was fantastic. All in all, one of the best weekends I have done with CMM.

So, as you can see I have had an extremely busy month with CMM. I’ve still got a lot of things on a to-do-list ready and waiting for me…

I will catch you all up next month with all that I get up to in November…. It is already looking quite busy, but I love being busy so… 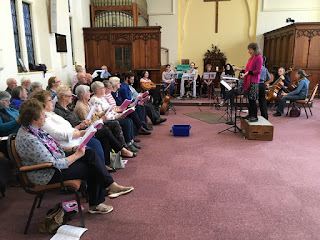 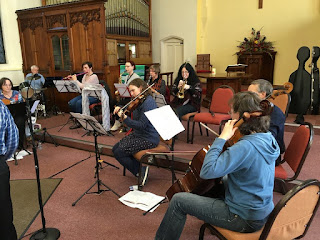