On Sunday, Roger is leading a special service at Grenfell Baptist Church in North-East Birmingham to celebrate 60 years of friendship with Phil Pattison.  Helen asked Roger a few questions about it:

How did you first meet Phil? 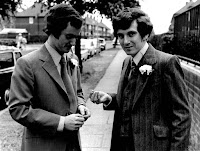 Phil Pattison and I were at junior school together.  We were in the fourth year juniors together, ten years old, and we developed a friendship because we both supported the Blues in football.  I even remember having a little fight with him on the corner of Repton Road!  We went all the way through senior school together - Alston Boys, often in the same class often sitting by one another.  At age 16 he went off to do an apprenticeship with work and I went off to do A Levels, so we lost touch.

How did you meet again? 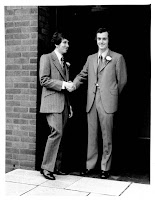 I met a crowd of Christians at sixth form and became a Christian. It was either first or second year I was a Christian we went carol singing evangelistically with Grenfell Baptist.  We prayed, "Lord, which block of flats shall we go and do?"  You see, blocks of flats were warm and had good acoustics!  People used to answer their doo
rs with money and we would surprise them saying we didn't want money, but invite them to church on Sunday and for Christmas.  Lo and behold one of the flats was answered by Phil.  He said to me that he wouldn't normally have answered the door and left it to his parents, but this time he opened it and we got chatting.  I invited him to church and he said yes, but as it happened he couldn't come that Sunday  He did come at Christmas and got such a welcome he stuck at it, joined the youth group, made a commitment to the Lord and was baptised.

I guess then you were in the same young people's group?

Yes.  He met Jane through that and got married before me and Mary.  I played for his wedding (so he tells me) and then he was best man at our wedding.  We kept in touch ever since - there was a bit of a gap when we moved on to different churches, and when we got in touch again he'd become an Anglican and so had I!  Eventually he became church warden.  It's been wonderful to have that friendship.  120 years - 60 years each!

Tell me a bit about Sunday morning.

On Sunday we're going to take the service back at our old church - Grenfell Baptist Church.  It's very small now in a mostly Muslim area - a very difficult place to do church, and a few of our friends are coming.  Some we knew have died, and the church has shrunk but we're looking forward to it.  I'm preaching and Phil is leading.  The minister we both knew from all those years ago, Edwin Boddington, is going to be there.  I taught his son the organ!  We both left when he was there for different reasons, but effectively he released us and we're going to feature that on Sunday.
Posted by Helen at 11:27