What must I do to be saved?

The article below comes from a leaflet that accompanies the musical Jail Break.  At the end of the performance this is ideal to give out to people enquiring about how to become a Christian or what the gospel message means.


What must I do to be saved? 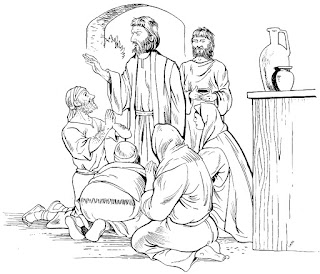 Paul and Silas are in prison praying and singing hymns at midnight despite having been flogged a few hours earlier. 'Suddenly there was such a violent earthquake that the foundations of the prison were shaken - the prison doors flew open - and everybody's chains came loose.' (Acts 16:25,26)

The jailer knew he would be executed if the prisoners escaped, so he drew his sword to kill himself, when Paul shouted at him 'Don't harm yourself! We are all here!' (Acts 16:28)

In the middle of the night, immediately after the earthquake, there would have been mess, confusion and darkness, but Paul's shouts achieved their aim. The jailer lit some torches, took them outside and then asked the big question:

Undoubtedly the jailer was asking about how he could save his own skin, physically. Now that the prisoners were all free he'd basically had it but Paul, the gifted evangelist, is not going to miss an opportunity like this.
'Believe in the Lord Jesus, and you will be saved,' replies Paul, giving a spiritual answer to a physical question.

Having been told to believe in Jesus he then listened to Paul and Silas who told him all about Jesus. He was then baptised and filled with joy. Later Paul and Silas voluntarily returned to jail so that the jailer was not executed but became a member of the new Christian church in Philippi. If we want to
know what we have to do to be saved the answers are all in this story. (Acts 16:16-40)

Believe in the Lord Jesus
Jesus created the earth. (John 1:1) He became flesh by being born at Bethlehem, lived a perfect life, died, rose from the dead, ascended to heaven from where he sends the Holy Spirit to his followers and where he is preparing a place for all who love him. One day Jesus will return to judge the world.

In short - Jesus is Lord.

It is a lot to take in so you may need time to think about it or read the story in the New Testament first before deciding if you can believe in Jesus Christ as Lord.

Be baptised in the name of Jesus
The stream where the jailer was baptised is still there, just outside the ruined city of Philippi, but anywhere will do. There are three aspects of baptism to consider:

a) Washing clean for the forgiveness of sins.
'All have sinned and fallen short of the glory of God' (Romans 3:23) so we need to say sorry for our sins and turn from them if we are to be saved. Symbolically the waters of baptism portray the willingness of God to 'cleanse us from all unrighteousness' (1 John 1:9), made possible by the death of Jesus on the cross. (Romans 5:8)

b) Dying to self.
We go under the water in baptism to show our willingness to die to self. Jesus said, 'If anyone would come after me, he must deny himself, take up his cross, and follow me.' (Matthew 16:24). This means putting Jesus and what he wants before me and what I want.

Baptism is symbolic but being 'filled with joy through the Holy Spirit' is what actually happens when we become Christians. The Spirit of Jesus enables our spirits to be born again. (John 3:6,7) to experience the forgiveness of sins, (Acts 10:43) and to call God Father (Romans 8:15,16).

After the jailer was baptised he was 'filled with joy' (Acts 16:34) and after we baptise people in the river beside our church we always lay hands on their heads, on the bank, and ask God to fill them with joy in the Holy Spirit.

Join a Church
After Paul and Silas came out of the prison, they went to Lydia's house, where they met with the brothers and encouraged them. The jailer was now one of the 'brothers' and would need the encouragement of the church to go on being a Christian in a difficult world, and to serve Jesus in it. So do we.

If you are not saved, or not sure if you are saved and would like to be sure, you might like to pray a prayer like this one:
Lord Jesus I believe in you.
Thank you for dying for my sins.
I'm sorry for the things I've done wrong and the good things I have failed to do.
I choose to follow you whatever it costs.
I ask you to come into my life by your Spirit as Lord and Saviour,
and to help me live for you. AMEN.

Then celebrate! Have a party. Invite your friends round for a meal and tell them all about it - especially Christian friends who can introduce you to a suitable church where, if appropriate, you can be baptised.
Posted by Helen at 16:24