Month 7 in the life of an intern

Here we are at the end of yet another month – a month which has certainly been busier than the previous one, despite the first event, a Worship Works weekend in Windermere (try saying that quickly multiple times), being cancelled due to the ‘Beast from the East’.

This month in the office, some of my jobs have included spending some more time using Sibelius to transpose worship songs into more suitable keys, taking some telephone orders, and proofreading the PDFs for an upcoming reprint of the Angel Voices score. This particular job was rather time-consuming, and made my brain hurt at times, however I did find it to be very satisfying in the end! I also cut up (not literally) the recently recorded DVD of the CMM Choir’s performance of Stargazers into individual tracks, adding the track information at the start of each video, in order to make it suitable for uploading to YouTube as required. It has therefore been another month of varied office jobs, which has certainly kept me on my toes!

The CMM Choir rehearsals started again at the beginning of March, and this term we are rehearsing Rock. I remember going to see Rock at DeMontfort Hall with my parents on its National Tour when I was about 11, and ever since it has been my favourite of Roger’s musicals. Perhaps now is the time to confess that 11-year-old Rachel was pretty starstruck by these people who performed in huge concert halls and went on national tours, and as a fledgling musician myself back then, I half wondered if it was something that one day I could be involved in. I wonder what 11-year-old Rachel would have thought if she’d known that 10 years later she’d be here working as an intern for CMM, alongside many of the people she’d just seen on stage?! I am therefore very much looking forward to the outings of Rock this year, especially Rock with an Orchestra on May 19th at the Coton Centre in Tamworth (that was a subtle advertising plug in case you hadn't realised).

The weekend of Palm Sunday saw two performances of Jerusalem Joy – one in Nuneaton on the Saturday, and the other at Pershore Abbey on the Sunday. Living in Hinckley, having to travel to an event in Nuneaton was a great excitement – a mere 6 minutes on the train, followed by a short walk, which is probably the least effort I’ve had to put into getting to a CMM gig thus far. Regarding the actual events however, it was interesting to compare the two, as the Nuneaton event was a ‘Musical-in-a-Day’ led by Annie, whereas the Pershore version was their own event augmented by a smaller CMM team, and I noticed that using different musicians and choir members could change the feel of a performance, though this didn’t mean that one was any better than the other. I had a different oboe part to play each day – at Nuneaton I played a transcription of the clarinet part, but Pershore had some musicians of their own (including a clarinettist), so I had spent some time in the office the previous week looking at the full score and copying and pasting bits of parts that weren’t going to be played. I therefore spent most of the time at Pershore playing a transcription of the viola part, but with other parts such as trumpet or flute cued in at the appropriate times! I very much enjoyed being a part of both performances, and I think the musical retells the Easter story in a powerful yet accessible way.

March also saw a trip up to Scargill House in North Yorkshire for a Spirit Works weekend. I’d heard a lot of great things about Scargill, but I’d never been, and I was not disappointed. It is situated in a beautiful part of the country, which, as I discovered, is perfect for early morning runs (yes, I appear to have turned into one of THOSE people), but even this was part of an opportunity to be away from the day-to-day busyness of life and spend time in a place that is devoted to God. I’ll admit that I find Spirit Works challenging, but I felt that Scargill provided a place to wrestle with some of these challenges, and I wish we could have stayed longer – the weekend seemed to fly by. I realised that it’s not until I stop that I become aware of how busy I’ve been, and how often I've pushed God to the sidelines, and the weekend at Scargill highlighted to me how important it is to take time to rest and to reflect on God’s goodness, and I would very much like to return for a longer stay sometime. 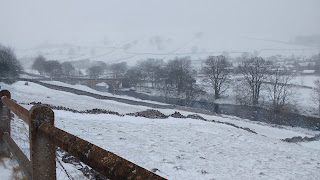