Creative use of Roger Jones' musicals at Evensong

Geoffrey Porter has written to tell us about a new initiative at St. Faith’s Church, Havant (Hampshire) where they have used Roger Jones' musicals to enrich worship and found their numbers at Evensong have more than doubled. The story appered in the July/August edition of Pompey Chimes, the Church of England newspaper for the Portsmouth Diocese.

From September 2016 to June 2017, recordings of musicals by Roger Jones were played on the first Sundays of the month at 6.00-7.00pm. This replaced the normal Evensong, when the service attracted about 6 worshippers. The average attendance at the "RJ Series" was 15. 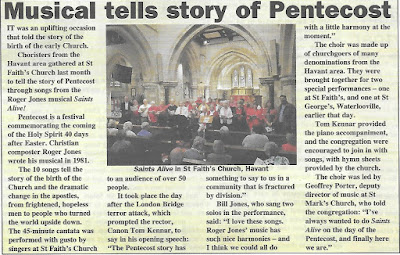 The pattern included a welcome and introduction, a reading from the relevant passage of Scripture, the playing of the musical, a reflection on the message by the rector, a curate or a reader, a prayer, a blessing and The Grace.

Musicals were chosen which lasted under the hour and sometimes linked with the church’s season. The video of “While Shepherds Watched” was included before Christmas.

Copies of the words, audience leaflets and vocal scores were provided and attendees were invited to join in if they wished. If there was no narration on the CD, one would be provided and in one case the drama was read. The series culminated in a live performance of “Saints Alive” on Pentecost Sunday, having listened to it the month before. 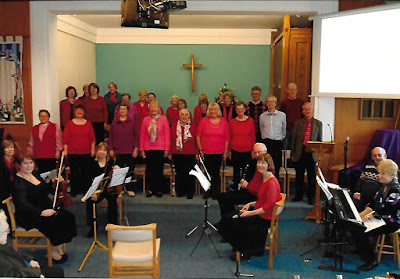 If your church is using Roger Jones' music to create new initiatives, please tell us more! Contact Lindsay on events@cmm.org.uk
Posted by Unknown at 16:03