End of the tour - Apostle in Newton Stewart

The CMM tour of Scotland and Northern England finished in great style - the team (Roger, Mary, Marilyn, Chris, Jonathan, Paul, Helen and Ann) drove down from Oban all the way to Newton Stewart in Dumfries and Galloway.  Newton Stewart is a regular stop for CMM, so regular in fact, that we'd already held some Worship Works workshops there!  So this time instead we led a weekend with the musical Apostle.
Our main hosts were Jeanette and Angus, members of the Monigaff Church, and owners of the lovely Christian bookshop/cafe in the town, Cinnamon.  We rehearsed together on the Saturday in the afternoon, and then performed the musical on the Sunday.  The choir had been working really hard in the weeks leading up to our visit, and they were absolutely brilliant - a delight to work with.

It was great for us to have with us Chris, Marilyn's husband, who took on the role of Barnabas in the musical with great style.  It was lovely to have him as part of our team for the tour.  Jonathan took the role of Saul, and Paul was Ananias, with Helen and Ann taking the disciples roles.  Marilyn played along on flute, and did an amazing job considering she hadn't really heard the musical before!
The performance went really well, with a good audience, and we are delighted that at least one person there gave their life to Jesus in response to the talk that Roger gave.
Praise God for all he is doing all over the country. 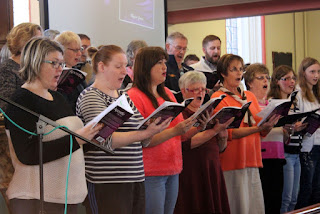 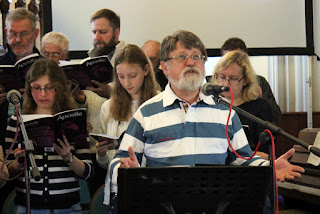 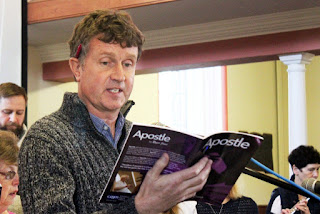