Worship Works in the autumn!

This autumn it has been a privilege to lead several Worship Works events in locations across the country.

It was an immensely powerful day, and we have since received a couple of letters from the church.  One of them contained the following:

"Dear Roger.  I am writing on behalf of the fellowship to express our appreciation of and our gratitude for the presentation of Worship Works at Jump.  On the following day there was no other topic of conversation, everyone was talking about the event and saying how much they had enjoyed it.  Our particular thanks go to you for the manner and style of presentation which was clear and easy to follow, relaxed and engaging.  Your team, too, all played their part admirably, contributing their skills to make a seamless whole, which was greatly appreciated." 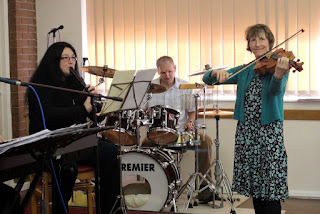 Later in September, a team from CMM - having already spent the week in Conwy - led a weekend at Rhos URC.  Keith, a member of the church, has regularly played drums for us, so it was great to visit him at his home church.  The rest of the team were Roger, Helen, Sarah, Carol, Graham and Mary.

The day attracted a really good number of people from different churches in the area.  It was also lovely to spend some time with the minister from the church, who was hugely encouraging.

We were blessed to have both Carol and her husband Graham on the team.  Graham was there in a leadership role, and it was wonderful to see them both growing in confidence and Gifts of the Spirit.  They have been such a blessing to our ministry since we first met them a couple of years ago. 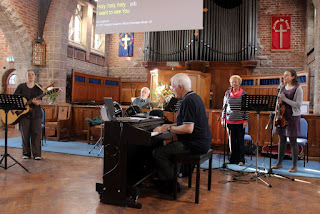 We then had three Worship Works events in the North of England and Scotland - watch this space for a future blog post on that tour, and then a couple of weeks ago held our last Worship Works of the year at St. Helen's Baptist Church.

We were invited to St Helen's initially by Betty, who along with her friend Eileen, have been regular guests on our holiday music weeks.  Betty is church secretary, and managed to convince them to have us along!

The team once again included Alan on drums, Cliff on bass (along with his wife Julie), Carol on vocals, Helen and Roger.  This time we were also joined by Jane (dance and prayer support) as well as Sharon and her daughter Gemma.

The team was warmly welcomed at the church, particularly by the Pastor, Tim, who is himself a musician.  Unlike previous Worship Works days, this one began after lunch, and culminated in a special evening celebration.  It was great to see so many from the church there, and also others from the surrounding areas - including some long term supporters of CMM.

The following morning we were privileged to help lead the morning service, alongside Tim who led an act of remembrance.  The church were very open to the Spirit and to new material - it was a real joy to share with them. 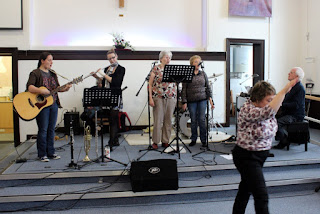 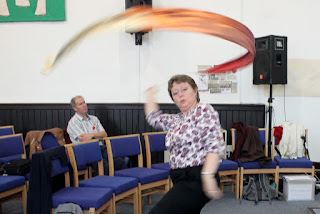 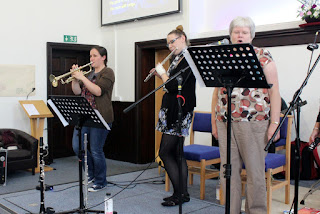 Huge thanks to all those who invited the team and looked after everyone so well.  We're really thrilled with how Worship Works is blessing so many congregations around the country.
Posted by Helen at 12:50