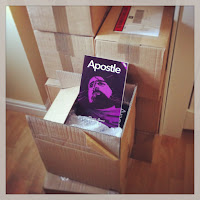 Finally the Apostle Book had arrived in the office and was ready for sale, so all that was left was to finish off the CD.  For all of the CMM musicals, one of the most important factors in a recording is to achieve a 'massed choir' sound - one which gets as many people involved as possible, and also one which shows how singable the musical is.  The involvement of a large number of singers also adds real richness and depth to the recording, even though it is a huge headache for Chris (our producer) finding takes that are both in time and in tune! 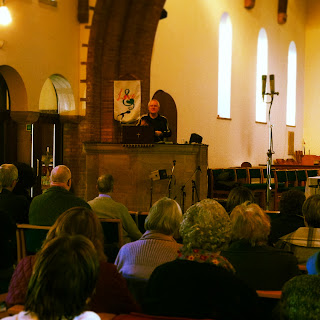 After a couple of initial worries about numbers and Chris suffering from an illness he picked up on holiday, in the end we had a wonderful choir for the recording day.

Keith was away on holiday, so Helen had to 'woman' the sound desk, leaving Annie and Roger to do most of the hard conducting work up front.  There was also some wonderful assistance from Denise on the bookstall and Sarah and Jane who came specially to serve tea and coffee.  There were also lots of other wonderful helpers who made sure the day ran really smoothly, so thanks to all!

We are really proud of the new Apostle CD, and we hope that it will bless many people and enable the gospel to be spread ever further.

As a special bonus here is one of the more bizarre moments during the recording day.  Bill was performing some silent narration, while the crowd reacted to him.  He is saying something like: "Brothers and sisters, let me introduce to you our brother, Saul."