In mid-February we had our rehearsal weekend for Israel, the first time the whole party gathered together to meet each other and put the finishing touches to Rock ready for the performances in Jerusalem and Bethlehem.  We were only missing 3 from the party - Philip and Colin, who live in Canada, and Janine, who was in New Zealand at the time of the rehearsal. 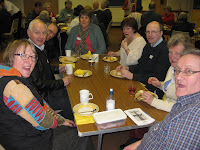 It was great to be all together for this short time, and we were looked after amazingly well by the folks at St Andrews Barnt Green, who allowed us to use the premises and kept it lovely and warm for the duration of our time there. 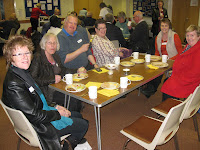 On the Saturday we set time aside for some admin, with Roger sharing some photos of Jerusalem, and time for the group to ask questions about the visit.  We also had a soloists rehearsal and a sectional.  It was clear from very early on that this was going to be an excellent choir.  Everyone had worked really hard to learn their words and the music, and the balance and blend of parts was excellent.  No-one had worked harder than Julie, who was joining us as a soloist for the first time.  The rest of the soloists travelling to Israel had performed their roles hundreds of times, but Julie was new to the part of Zillah, and did a fantastic job.

On Sunday we met together to rehearse in the afternoon, and then finally perform in the evening as our 'dress rehearsal' performance.  There was a good turnout for the congregation, including a number from the CMM choir as well as members of Barnt Green and Lickey churches.  The performance was really moving.  The cast had not performed together for a long time, but the spark and rapport returned immediately.  We were also really blessed to have the help of Paul and Kim on the sound desk.  Alongside the choir and soloists we also had Charles playing his clarinet, with Helen on flute and Annie on viola.  Annie had rearranged the parts for the instrumentalists to suit the three instruments.

It was a great weekend, and wonderful to meet together and to pray together for the peace of Jerusalem.