A few last bits to tell you all about regarding CMM's Christmas.  Firstly, Roger, Helen and Annie all spoke at different meetings over the Christmas season.  Roger led a men's meeting at Bromsgrove Baptist Church.  He was delighted to be able to have with him his son Tim (who is a member of the church) and also his son-in-law Karl.  One of the highlights for Roger was being able to interview Karl and to encourage him to share his testimony.

Annie spoke at Sutton Coldfield Baptist Church ladies' meeting, which is an event she has been to for a number of years now.  Usually she has a soloist with her, but this time was unable to take someone.  She was still able to share with them using CDs and visuals on the screen, and also playing piano for lots of carols. 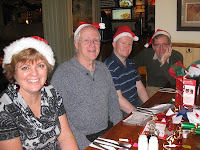 Helen wasn't able to be with Annie, because at the same time she was speaking at Catshill Baptist Church's Bible Study group Christmas meal.  They invited her following her visit to the ladies' breakfast outreach event last year.  Dinner was lovely! 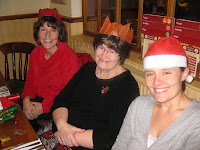 Just before the office closed for Christmas, the staff (joined by Bob Deakin who was visiting) went out for their Christmas lunch to the local Brewer's Fayre pub.  Nicky found some provocative Aston Villa earrings to wear, and much fun was had by all.  The pub had furnished us all with crackers, hats and party poppers, which were all used (as long as Annie had advance warning about the poppers).

The final bit of important Christmas news should have been announced a few weeks ago.  After a long wait, Gemma finally gave birth to Roger and Mary's latest grandson, Henry William, on the last day of November. Congratulations to them, and welcome to the world Henry!  Roger and Mary have enjoyed seeing Henry a lot over Christmas, although Roger has had a cold and has only been able to hold him once so far. 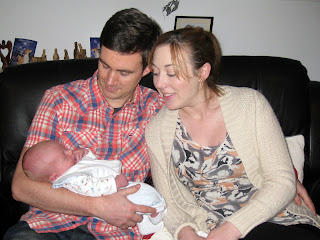 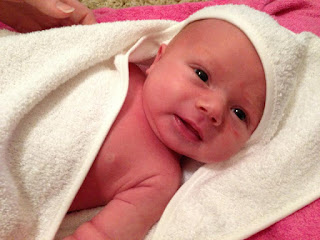