A flurry of performances

We've been hearing a lot recently about your own performances across the country.  Do let us know!

The following is from Sarah Moreton in Hemel Hempstead.  Sarah borrowed one of our soloists, Devon, to help them out with a special Wildfire performance in Watford: 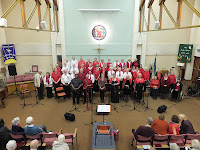 
Devon actually arrived early!! I will claim that as a personal triumph!!! He was a star – you know what he’s like to have around. The choir were splendid and we had some very encouraging feedback from choir and audience alike.

The charity trustees, for whom we raised £1500, had never heard anything by Roger before, I don’t think, certainly not Wildfire. They were quite overwhelmed by the music, the message, the spiritual presence, and by peoples’ generosity – the sum raised was exactly what they needed to finish a particular project in India, the refurbishment of an orphanage (which, I gather, at the moment is a glorified 3-bedroomed town house housing 30 children and their ‘foster-mother’, Sister Lilly!). The name of the charity we were fund-raising for is AFIRM India. There were about 50 performers altogether, and an audience of 120-ish, at St Thomas’s Church, Watford.

We also heard from Gordon in Oxfordshire:

Dear Roger
I know you will want to hear how our little musical went, last Saturday. You'll remember we took songs from some of your works and had a script specially written to turn tham into a coherant work.  To judge by the e-mails and phone calls, not to say people coming up after church, I'd say it was an unqualified success !

Around 150 audience and 45 cast & crew spent a wonderful couple of hours with the Lord ! As we always find, the experience was very moving and people left having been uplifted by some wonderful music (especially settings of When I survey and Lord make us instruments, which is one of my favourites too)
In our panel game, " Holy Heroes ", I'm afraid you narrowly lost the vote to Robert Raikes; but what company to be with !!

We made a modest profit, on the evening, and we have decided to send a donation to EBRG, to help you carry on the work of the Gospel. I'll organise it in a few days, when all the funds are in.
Thank you so much, for all you do to bring people closer to our Lord. May God bless you and all the team, in the future. We are already looking forward to 2014, when we can welcome you to be with us, with "Ways to Praise".
In His love
Gordon


We've had a quick email from Beresford and Kate King-Smith, to say that their choir will be including Roger's anthem 'Love came down at Christmas' in their Christmas service - we hope it goes well!  Also another message from a primary school in Nottingham planning on using 'Come, see the beauty of the King' as the finale to their Christmas concert.  It should be great.

We know there are a lot of performances coming up in the run up to Christmas.  Do let us know how you all get on!