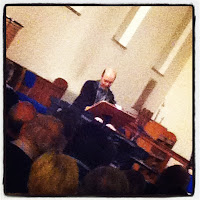 On Wednesday evening we were privileged to be able to host Michael Card and his team at Christ Church, Burney Lane.  18 months ago Michael came at quite short notice when he needed a venue quickly in the West Midlands.  The concert was such a blessing that we were delighted when his tour operator in the UK, Gordon, approached us again. 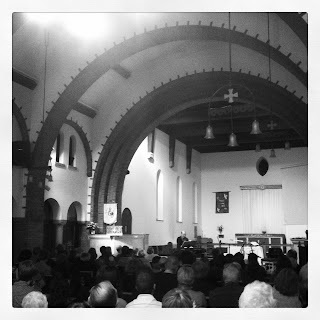 This time Michael brought with him a long-standing friend, Scott, who also is a singer-songwriter.  The two of them worked together beautifully and shared with us some thought-provoking and inspiring songs and testimony.  Michael is quite a Bible scholar, and has really dug deep into the scriptures, from which all of his songs flow.  It was great to hear him talking about the different Bible books that had influenced his lyrics, including Blind Bartimaeus in Mark, and his plans to move on to John's Gospel in future for study and more song inspiration.


Tickets had been moving very slowly in early September, but a late rush meant that the church was comfortably full.  Pat was an amazing star, spending most of the day in the kitchen preparing to feed the whole team.  Peter was also a huge help shifting furniture and chatting to audience members.  Thanks also go to Alan, Sue and Mary for helping on the doors.  A wonderful evening was had by all.
Posted by Helen at 10:04