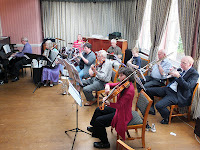 Roger, Mary and Annie have now returned from the David music week at Willersley Castle, and they report that they have had a wonderful time.  Roger has put a large number of photos on his photobucket site, 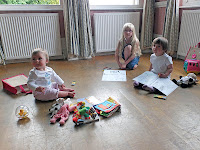 The team did a wonderful job - not only Paul training the choir and Marion hosting, but also Carole and Sarah spent a lot of time playing instruments and singing, and ministering to people.  Carole had brought with her her two very young children Hannah and Eleanor as well as her niece Katie.  Katie stole the show when she sang the whole musical with the choir and also a couple of solos in the performance.  Katie says that Paul is nowhere near as strict as her own choir conductor at home, but some of the photos of Paul in action make us wonder! 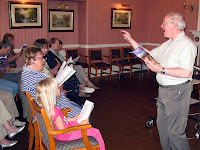 Amazingly for such a small group there were two piano accordion players - Viv and Wlod.  Viv played in the orchestra and Wlod played for the worship times.  The orchestra also had a violin, a guitar, a horn (young Hugo doing a great job!), a trombone, as well as Paul on piano, Annie on viola, Carole on 'various', Kevin on cornet and Alan on the drums.  They complemented the choir really well for the performance, and the soloists were really good too. Another highlight was the David and Goliath song - Ray and Gill Lockhart took the parts of Goliath and David respectively.  It was a funny moment seeing him fall at her feet! 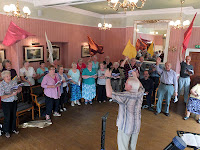 One of the guests, Helen, had brought with her some flags - the choir used them in the performance and others used them in worship - they added a lovely extra dimension to things. 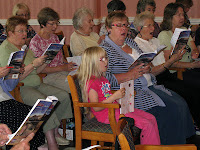 Overall it was a wonderful week, and the staff at Willersley looked after the guests really well.