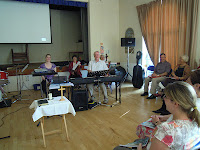 On Saturday Roger, Annie, Bill, Paul, Richard and Amy travelled to Salisbury to lead our first ever 'Seasons and Reasons' Day using the new book and CD for a base.  It was wonderful to be in Salisbury, as this is the home of Bishop Timothy Dudley-Smith, and he came, along with some members of his family who had travelled all the way from Ipswich.

The team were also joined by some local helpers - Grahame Chubb played the drums as well as organised the day.  Alison Larkham played cello, while her husband Andy did a lot of choir training.  They were a huge help and wonderful supporters.

Roger divided the day into several sections:
Psalms and Seasons - which picked out the music from the book which was based on Psalms, and some others that fitted into the various seasons such as Christmas, ascension.

Rites, Rhymes and Reasons - which looked at why we worship, and also included some of the songs that fit particular events such as baptism or the creed.

Come, let us praise the Lord - this was the finale of the day, which was a worship service which included an interview with the Bishop as well as lots of songs/hymns from the book.

The day went very well, and the team received some lovely comments at the end.  This comment came from the vicar at the church: 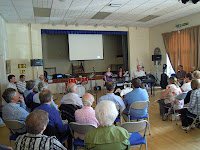 Dear Roger,Thank you, and all your team, very much indeed for travelling down to put on such an inspirational day. Everyone I spoke to found it spiritually energising and uplifting - 'tingles down the spine' was one comment. I am very hopeful that we will be able to introduce at least some of the hymns & songs into our regular worship in the Winterbournes. Rev Peter Ostli-East