Immediately after the visit to Rhos, Helen and a team travelled to South Wales for a Wildfire in a day.  Helen's other sister Miriam picked her up, and together they drove to their parents house in Neath, ready for the day on the outskirts of Port Talbot.  On the Saturday they were joined at Sandfields Methodist Church by the rest of the team - Bill, Phil, Caroline and Wendy. 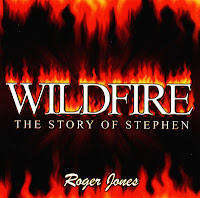 Wildfire is a very difficult musical to learn in a day, and there was mild panic amongst the team when most of the singers asked to use the words copies rather than the music.  But it is utterly amazing what the mind can achieve in terms of memory work - particularly when it comes to learning songs.  None of the choir had sung the musical before apart from Helen's mum, so this was a big challenge.  The choir sang mostly in unison, but those that read music were able to put in some harmonies as things went on.  There were a few dicey moments where the sopranos made up the tune, but the overall result was absolutely amazing.

Phil (Stephen), Bill (Paul), Caroline (Rhoda), Wendy (Lydia) and Miriam (Anna) did an amazing job.  The three ladies blended beautifully well, and did a great job in the widows song.  They also worked on some drama with one of the local girls' brigade girls - they added some wonderful drama into the 'Signs and wonders' song, and also into the stoning scene - aided by some of the men including Helen's dad.

The performance was very powerful, and there was a large audience.  A man called Chris narrated with a wonderfully clear voice.  Helen shared the Gospel at the end of the musical, and it finished up with some wonderful drinks and cakes.  There were some lovely comments after the musical, including one that it was 'the best thing ever!'  Hopefully CMM can return to the area one day, and do a different musical that is easier!

The following morning Helen preached in the church, assisted by her mum and sister, who were brilliant in leading some music ministry time.  The congregation even coped with Helen's latest children's song - 'Super Saviour'.  She preached on Stephen and about being both a practical and a Spiritual person, and spent quite a while asking the Spirit to come.  We pray that God will continue to work and really bless the area.
Posted by Helen at 12:26