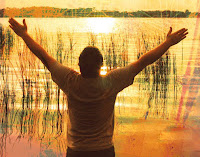 While Roger and the work of CMM is mostly known for the musicals, it is always a delight when we are invited for a different reason - to lead workshops on worship or life in the Spirit.  This time a team from CMM were invited by Bob Deakin to travel down to Appledore in North Devon for a music in worship day at the Baptist Church.  Bob has long been known to CMM as a soloist - he played the role of Joseph of Arimathea in the musical Pharisee in 1996.

Roger took with him Annie and Marilyn, and also had Bob on the team for the day.  Appledore Baptist has several worship teams, and many of those involved came to a day of workshops on the Saturday including teaching such as 'Being a worshipper', 'Ways to praise' and 'Planning and leading praise'.  Roger says the day was wonderful, and God was clearly moving among the people.  We pray that particularly the worship leaders have been encouraged to move people forward in intimacy as they praise and worship together.

The following morning the team were involved in the morning service at the church.  Bob led worship and Roger preached, and the service was very lively with a good music group and some prophetic words/pictures.


It was so good to minister at Bob's church - we look forward to going again someday!
Posted by Helen at 11:47