In mid-August a team from CMM travelled to Willersley Castle, near Cromford in Derbyshire.  Willersley Castle is one of the Christian Guild hotels, and our visit there has become one of the highlights of the year.  CMM's team for the week were Roger, Mary, Annie, Phil and Kathleen.  Annie took the orchestra, and Phil led the choir and played piano for the final performance. 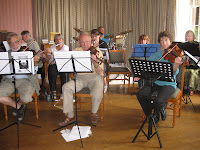 The musical this year was Two Sisters and a Funeral, and this was our third music week to take this theme.  Annie had a nice big orchestra to  work with, including two violins, a flute, clarinet, soprano sax, cornet, guitar, drums and piano accordion. 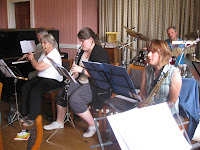 During the week Roger led three Bible studies looking at the different characters in the story - Mary, Martha and Lazarus.  The Mary talk focuses on worship, and being able to sit at Jesus' feet.  The Martha talk goes into some depth looking at Martha's character - both what she did right and what she did wrong.  Finally the talk featuring Lazarus takes Jesus' line 'Take off the graveclothes, let him go!' and thinks about what graveclothes we might still be wearing even though we have given our lives to Jesus. 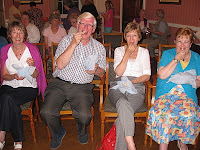 On the first morning Annie preached - and she really enjoyed it.  It's always great when Annie gets to speak at a meeting, as she is a really good communicator.  Another highlight of the week was a dvd evening when the group watched a documentary about the making of the King James version of the Bible.  A number of the group bought popcorn specially! 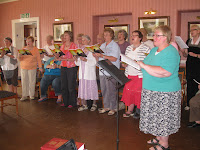 The final performance went really well.  Earlier in the week the request for soloists at the auditions resulted in no men at all, which was a big issue when a Jesus, a Lazarus and at least two baddies were needed!  Clyde forgot, so he was soon commandeered into being Jesus.  Jonathan had managed to come to quite a few bits and pieces during the week because his wife Linda was staying, and as he had sung Lazarus on a few occasions for the CMM choir, he filled in the gap!  Then Richard and his family came to watch the final performance, so Richard became chief baddie! 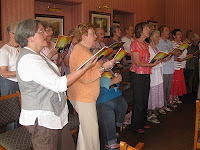 It was a great week - thanks to the staff at Willersley Castle for their hospitality.  Looking forward to next year, where we'll be learning the musical David, but interspersing a lot of activities to do with music and worship.