The second update from Helen:


We had a lovely day off on Monday, and were shown round the area by a local historian and a local butcher!  That evening we went to Florence (the choir trainer)'s house and had dinner with her.  She lives in an amazing old schoolhouse with her dogs and her horses, as well as her harp - she gave me a quick lesson!
On Tuesday we began our mammoth tour around all of the primary schools in Bailieborough.  It was incredibly hard work, and some of the children were more interested than others!  The younger ones particularly loved joining in with the singing and the actions.  One thing that we hadn't thought of was that they would laugh when Devon did his crying bit!  Rock isn't particularly designed for children, but we managed it - and a couple of the children even forced their parents to bring them to the concert last night.
On Tuesday evening we divided into two teams and went and led a couple of housegroup meetings.  Roger took Aly and Andrew to Florence's house, and I took Devon and Alan to a lady called Christine's house.  Christine is originally from Lincolnshire, and hasn't lost any of her accent.  She's absolutely amazing, and really has a passion for God.  She invited all of her neighbours, and her room was packed out.  It would have been even busier had it been raining and the farmers weren't out making silage.  The evening was well received, and there was a real buzz in the room afterwards. 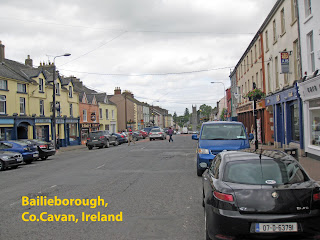 Yesterday we visited the last two schools to make 5 in all - although the last school was just a nursery where we just sang a couple of children's songs with them.  We had a nice break after lunch and then travelled over to Kilmore Cathedral for the performance.  Setting up the sound was a nightmare, but it worked out perfectly in the end, and the performance went really well.  Huge thanks go to David from the choir, who has neglected his fields in order to help us with the technical side of things.
This visit to Bailieborough has felt very much like preparing the way.  Maybe we will be invited back, and they will know us and trust us, and allow us to share more than just music with them.
Posted by Helen at 11:58