Another event in a very busy week saw a team from CMM travelling to Coventry Methodist Central Hall.  The organising force behind the event was Olive Holtom, a long term supporter of CMM.  She was very sad that we were unable to come to Coventry with Rock, and so bullied us (nicely) over a number of months about Two Sisters.  She managed to book the Coventry Central Hall, and also its minister, Paul Wood, to train the choir.  Paul did a brilliant job - the choir sounded fantastic.  The choir were joined by a few extras from the East Birmingham CMM choir, but they weren't really needed. 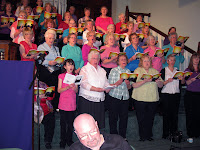 The central hall is a wonderful venue, with loads of room for audience, wonderful tiering on the stage, and plenty of space for the cast.  Paul worked really hard to set up the sound system, especially when he was surprised by the addition of Annie on viola and Helen on flute and trumpet.  The rest of the CMM team was unchanged from the Leicester performance. 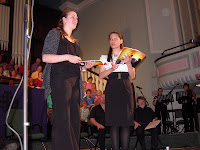 At the previsit Olive had been asked how tickets were going.  She said that she was sold out, and when asked how many she had sold, she said she didn't know as she kept printing more!  The turnout at the performance was wonderful - downstairs was nearly full, and upstairs held a decent number too - probably just under 350 in the audience, which was wonderful.  Well done Olive!  Thanks so much to both you and Paul for all your hard work.
Posted by Helen at 12:35