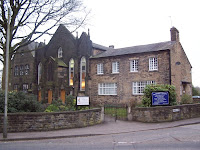 On Saturday 5th March, Roger, Annie and Helen, along with Jonathan, Caroline, Ann, Devon and Martin travelled up to Bamford Chapel, a URC church in Rochdale, and the home church of Walter Brisk, conductor of the United Christian Singers.
UCS are a large choir from the Manchester area, and have been great supporters of CMM for over 20 years since they first began for the production of Mary Magdalene at the Free Trade Hall in the city.  Walter conducts the choir, and holds two rehearsals a week – one in the north of the city, and the other in the south, and there are about 100 choir members altogether. 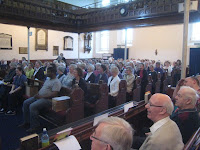 On Saturday UCS hosted CMM, but advertised it as a workshop day open to everyone, so there were about 80 UCS members, but also more than 40 others present – a wonderful choir.  UCS had had some rehearsals, so they formed the backbone of the choir, but there were quite a few singers who were new  so we treated it as a scratch choir day.  Roger led the first rehearsal, and then Annie took the ladies and Helen the men for the second rehearsal.  Finally we put it all together before stopping for a wonderful faith tea, and then the performance at 7pm.  (I must not forget that the team were treated to a wonderful lunch before the workshops began!) 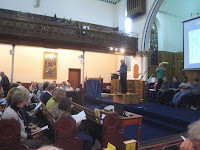 The performance went really well – the choir remained in the congregation pews and the audience sat around them and up in the gallery.  Caroline and Ann were Martha and Mary respectively, Devon and Martin were Lazarus and Jesus, and then Jonathan managed to be both ‘baddie’ parts all on his own!  Annie and Helen played their instruments, ably assisted by local techie Gareth who was in charge of the backing track and microphones.
The following day the team split up to cover two services – Roger preached at Bamford Chapel, and Helen preached at Brimrod Methodist Church.  This is an exciting development in CMM’s ministry, and it is wonderful to be able to meet with folk who aren’t usually part of the choir.  People often see CMM as just musicals, but in the local church situation we are able to bring in far more – teaching on worship and life in the Spirit particularly. 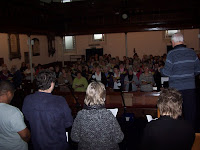 After lunch with our wonderful hosts we travelled home.  Thanks to Walter, Tony and all of UCS for hosting us – it was a wonderful day.
John Pye has added some photos and a writeup to the local deanery website: http://heywoodandmiddletondeanery.org.uk/homepage
Posted by Helen at 14:03