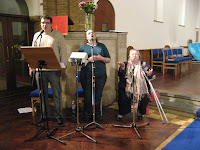 This year we have regularly been joining up with Peter Smith and the team from Christ Church, Burney Lane, Ward End to hold regular Holy Spirit events.  So far they have mostly been renewal evenings on a Sunday evening with various speakers, but this time we went for a whole weekend of workshops and worship, culminating in a renewal evening on the Sunday evening.

There were about 50 of us in total, and we had a wonderful time.  On the Saturday Annie kicked things off with some worship and then Roger spoke on thirsting and drinking, using illustrations from Ezekiel 47 and Jesus at the feast of tabernacles. 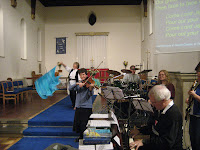 After this first session, we broke up into 3 workshops.  Jane and Gill led a prophetic movement workshop, which really blessed those that were involved.  Brian and Sue led a 'Using the gifts' workshop, focusing on the link between the gifts and fruit of the Spirit. Helen and Alan led a 'Receiving the power of the Spirit' workshop, which included a lengthy time of silence, simply allowing people to wait and receive from God.

In the afternoon we had two more workshops - Annie and Mary led a Ministry in the power of the Spirit session, and at the same time Roger led a prophetic worship workshop.  Those that attended seem to have been really blessed by all the workshops - what a priviledge it is to be able to train people in life in the Spirit. 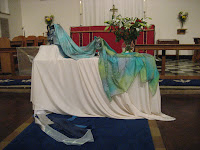 After these workshops we had a final session with worship led by Helen and the Peter Smith spoke.  He didn't speak for long - the emphasis was on giving people plenty of time to simply receive from the Lord.

On Sunday, CMM took part in the regular morning service for Christ Church, and Helen spoke, linking a well known healing model called 'The Circle of God's Love' with how Jesus dealt with Peter in John 21. 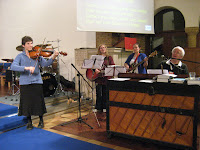 In the evening we held our now regular renewal evening.  Peter Smith spoke, and it was great fun.  A lot of people received ministry, and it was so good to see God at work in people's lives.

We had a fantastic music and ministry team for the weekend - including Tim on drums and Christine on flute.  It was the first time Christine had been part of a CMM team, and it was a delight to have her.
Posted by Helen at 09:56