While Annie was working hard in Swindon, Roger travelled with Helen, Bill, Devon, Alan and Amy up to Penrith, for a very special weekend at the Methodist Church.

The Saturday was a special 'From Pharaoh to Freedom' day, and the team worked alongside the wonderful choir that had learned the musical specially.  The choir really were excellent, trained by an amazing team led by Claire, who also sang solo.

Pharaoh was a challenge for the CMM soloists - they had all learned Apostle for the three performances coming up in Scotland for the next few days, but this one was considerably harder!  The team worked hard all morning on their own learning the music, and then joined in with the choir rehearsal in the afternoon.

One of the delights of the Penrith performance - as well as the wonderful choir and John the excellent narrator - was the group of dancers who had really thoughtfully choreographed a number of the songs.  For the song 'When I see the blood' they had one dancer with a black flag to represent the Angel of Death, and then other dancers with red flags were the blood that stopped the black flag getting past.  Then the song 'Take, eat' was incredibly moving when the dancers formed a beautiful tableaux.

The performance went well - the CMM team mostly remembered their lines, the audience were appreciative, and the choir superb.

In the morning the CMM team lead the service at the church.  Helen led most of it, with help from the team, and then Roger preached on the theme of ascension.  It was brilliant to share with the congregation there and there was good opportunity for some prayer ministry afterwards.

Then after a shared lunch, there was a short break before rehearsals began again, this time for a very special Musical Man evening.  Graham, our host in Penrith for the weekend, is the author of Musical Man, the biography of Roger Jones, and it was a wonderful opportunity to take the Circuit evening service, featuring the launch of the book.  For the majority of the service, Helen interviewed Roger, bringing out some of the moving themes Graham had covered in his writing, and the CMM team sang some songs, wonderfully supported by the Penrith choir.  One of the highlights of the evening was Graham's introduction - he handed Roger a signed copy of the book saying, "Roger Jones, here is your life!"

Huge thanks go again to Graham for organising the weekend, the choir trainers, and the amazing hosts who looked after the team so well. 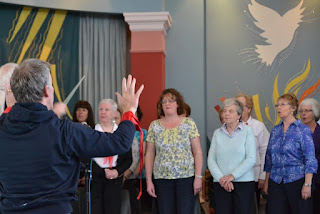 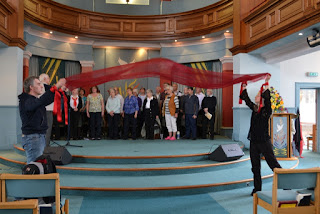 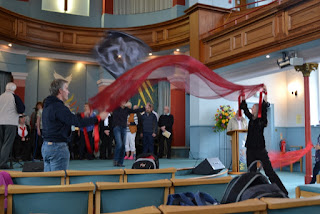