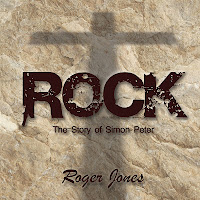 On Friday morning Jonathan came to CMM to collect Roger, and together they drove to Bridlington.  A few months ago we had a large order for some Rock scores, and when we found out a bit more we discovered that this was a large choir learning the musical to perform in the Spa Centre.  The plans are to perform the musical as an outreach event with full drama and costume.

When Roger discovered he would be in that area anyway, he approached the choir organiser to see if he could pay them a visit.  A visit to the choir rehearsal quickly extended into a meeting with local church leaders and also a workshop on the musical.

Roger and Jonathan had a brilliant evening meeting with the choir.  They had a full complement of soloists, and Roger encouraged them to have a go at the prophetic section at the end of 'In Caesarea beside the sea (reprise)'.  Apparently they all had a go and did a wonderful job.

We continue to pray for the choir, that God would bless their rehearsals and move in a powerful way in the performances next year.  We will be taking Rock to Israel in March, and we are delighted that one of the Bridlington choir, Liz, will be joining us.
Posted by Helen at 10:47