The Inn Crowd in Hinckley 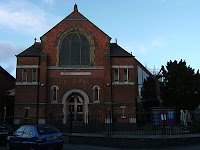 On the 3rd December, Roger, Helen, Devon, Ann, Simon & Laura, Emily and Amy travelled to Hinckley for 'The Inn Crowd'.  Simon's sister Rachael had been doing all of the preparation work and choir training for the day, and their mum Sue had also done an amazing amount of work - including cooking a special casserole that didn't include any of the bits Devon normally picks out!  An amazing feat!

Roger worked hard with the choir, rehearsing and doing some bible teaching, Helen and Amy played various instruments - this time it was a horn, a trumpet, a flute, a bassoon, a clarinet and briefly the piano!  Ann and Devon played the parts of Debbie and Sam, and Emily and Simon were Mary and Joe.  It was quite nerve-wracking for Emily to sing, as she is a lay worker in the Hinckley circuit, and it was the first time many of them had heard her sing.  She had no need to be worried though as she has an amazing voice. 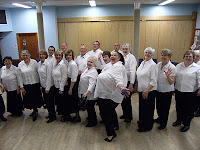 Rachael had also trained some amazing shepherds - Fern, Lisa and Jacob - all three of them had really good voices and stole the show.  The tenors and basses were all too chicken to sing solo, so we had an extra large group of wise men - which was great fun.


The general atmosphere was wonderful - there was a nice sized audience and a lot of fun was had by all!  Laura did an amazing job on the bookstall as always, and we were also blessed by John running the sound system and doing a great job.  Sadly we don't have any photos of the day but I've included a couple from our Hinckley Rock performance anyway - the choir were a lot more Christmassy this time round though!
Posted by Helen at 13:59