While Helen was busy in Beeston, Annie was working hard in Weston.  Peter Perrin in Weston had organised a special Two Sisters and a Funeral weekend for the churches in Weston-super-Mare, which involved a day of rehearsing and then a performance the following day.

Annie spent the day with the choir on the Saturday, teaching them the musical from scratch, and as there was plenty of time, taking the opportunity to share some of what the Bible has to say about the story.  The biblical foundation to the ministry of CMM is essential, and it is wonderful on days like this when we have chance to bring to people more than just the story. 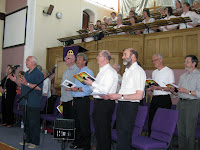 Annie was supported by a wonderful team on the day - Caroline, Kaye, Wendy, Bill and Phil.  It is great that we have so many vocalists fairly nearby who were able to help out.  Annie also did a wonderful job including some of the words and pictures EBRG had received while praying for the event.  It is so amazing that we have a God who speaks personally to each of us, and that CMM can share some of that in its ministry.

On the Sunday, Roger and Mary joined the team for the afternoon rehearsal and then performance.  Roger took over the conducting duties, and Annie switched to viola.  The team was also augmented by Richard, who was down in Weston from Nottingham to see his beloved Dover play - and he will have been delighted to see them beat the locals 4-1.

The performance at Clarence Park Baptist went really well, and was well received.  Thanks so much for Peter for organising the event - it is always great when CMM can visit Weston!
Posted by Helen at 09:27