Following on from the music week at Sidhome, September was a reasonably quiet month at CMM.  Holidays were taken, and the team began to fill all hours of the day working on the next project - Spirit Works.  There were a couple of road trips though:


Roger, Mary, Devon, Annie, and Catherine travelled to one of our regular venues - Meadow Way Chapel in Norwich.  There they were joined by Maurice on violin, local instrumentalists, local soloists Irene and the wonderful choir.  This time instead of a musical, the local choir had revisited songs they knew from past performances, and these were combined with Roger's testimony to create a Musical Man evening.

It was wonderful for Roger to be able to share his story at a church he has visited so regularly and who have played such a big role in his ministry.  The team also took the morning service for the church who now meet at the local community centre.

Later in the month Roger, Helen and Jane travelled to St, Nicholas Alcester for a Barnabas day, where they were joined by Devon (Saul), Richard (John Mark), David (Barnabas), Katie (Miriam), Yvette (Rhoda) and Christine (Flute).  Katie and her mum Pat had organised the whole day, and Katie had trained up a fabulous choir.  Katie's brother very kindly set up and ran the PA, which was a huge help.

We spent the day rehearsing, and put on a performance in the evening which was really well attended.  It was lovely having Jane on team to share in prayer ministry and support, as well as to dance in the improvised worship times.  It was the first time Jane had fully been part of a Barnabas day as she had been unable to attend the premiere.

One of the more memorable parts of the day was seeing Devon and David perform together as Saul and Barnabas.  Devon had hurt his knee leaving him on crutches, and David is awaiting a hip replacement.  We always had to give them plenty of time to slowly make their way up to the microphones! 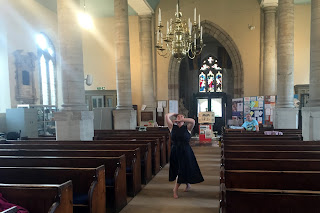 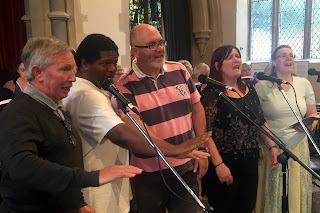